In a follow up post to Welcome to the Jungle, we've made some progress in the garden in recent days.

I was alerted to a full on Twitter storm this morning.  No, not the Piers Morgan kind.  This was a pair of Blackbirds desperately trying to defend their nest against a Magpie.  Sadly, Blackbirds never seem to learn and often nest low, making their eggs and young easy targets.  I made my presence known and the Magpie took flight a couple of times, but nature will no doubt take its course. 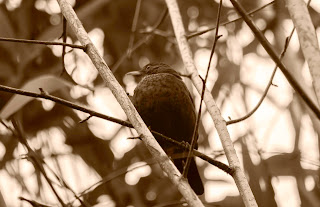 The birds aren't the only ones under threat.  Ridgehill Wood, the wood our garden backs onto, is a hive of activity at the moment.  There's a huge tree felling operation in progress and the locals aren't happy!  This is the scene just beyond our garden gate. 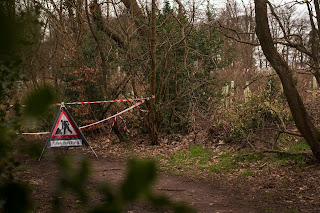 Conscious that we are somewhat visible to walkers, spectators and tree surgeons, we've been tidying up the woodland boundary.  Fence panels aren't our thing and only get kicked in by woodland fire starters, so we're making the most of the abundance of Holly already growing there.  Think of it as the horticultural version of basket weaving. 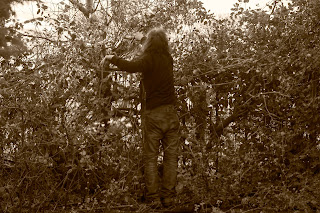 The path through the lower part of the garden also needed repositioning.

The path now follows a less treacherous route through the garden.

The "risers" have been punctuated by Mind Your Own Business, its delicate foliage giving me another macro photo opportunity.  I've also replaced my much missed Tree Peony (an early Anniversary present from my Mom).  Again, under a macro lens, the buds look otherworldly. 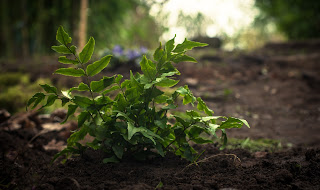 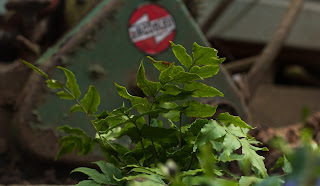 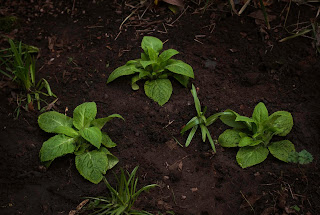 In doing so, I've also freed up a ludicrous amount of pebbles (once at the bottom of a sea bed no doubt).  I've cleaned them up and am aiming to make a narrow path with them, rather than just skimming them over next door's fence every time my spade hits one (I jest!)  Some of the patterns are beautiful. 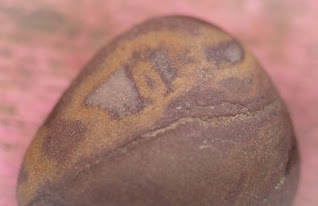 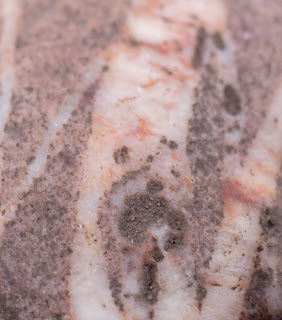 In a nod to our other life (the brand Voodoo Street), we have been making use of our stock of Genuine Rust Paint.
When we were allowed to trade at festivals, our customers were primarily hotrod and VW owners looking for that "barn find" look.  However, we have, over time, persuaded them that it's also excellent for transforming any given piece of tat into an objet d'art.
One of our festival props was an old mannequin we named Dr Edwin Jones.
He was illustrated with Sharpies by a local artist, Yvette Appleby.  You can view her work on Instagram here.
yvette appleby (@creative_curiosities) • Instagram photos and videos
We went through a phase of collecting mannequins to decorate and/or to display our clothing and one of them has been loitering in the garden for too long without a purpose, so we've rusted her up.  I'll share a photo when she's decided where she wants to set up camp!
I'm also partial to a bit of verdigris and so Gareth also developed a paint that speeds up this process.  The paints are all low VOC and contain no nasties.
We purchased a Buddha head which was a garish shade of red and way too shiny (you'll have to trust me - I forgot to photograph it).  We painted it (this paint is green when first applied), dried it... 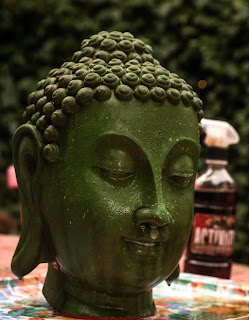 ....wire brushed and activated it (all included in the kit) and it's been transformed, looking for all the world, like an old antique, weathered and enhanced by verdigris. 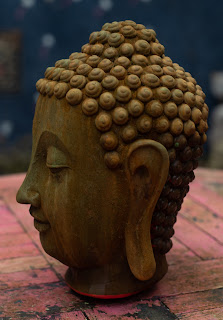 Last night, one week on from my "Horror on the Heath" accident, we revisited Highgate.  Thankfully I managed not to face plant the camera this time, but I did get some dusk shots of the local wildlife.  Just love this time of day!