After last Friday's Birthday bomshell - our son testing positive for Covid, daily testing has delivered nothing but negative tests for Gareth and I, which is astonishing considering how transmissible Omicron is.  Conversely, friends of ours - a household of four - have all tested positive this week within a 48 hour period.  Go figure!

We haven't ventured far this week.  We delivered an order to a customer in Telford.  Occasionally we like to deliver to local customers.  We take pleasure in the inevitable resulting messages of surprise from bemused customers who had only placed their orders a matter of hours earlier.  However, after answering other queries and dealing with the other day's orders, a planned venture to Attingham for Gareth's birthday (we were born 5 days apart) was abandoned as we simply ran out of day!

Most mornings have offered up frost-lustred landscapes, followed by some watery late afternoon sunsets; none as rich in colour as last week's sunset on Kinver Edge. Winter Peach Photography: January Made Me Shiver

Speaking of which, when we were there last week, we spotted another photographer in the distance, pointing his camera in our direction.  We nodded in greeting as we passed each other in that anorak way that people with shared interests do and continued on our way.  A few days later, I received a private message on Instagram "Hi, Is this you?" with an accompanying photo of me in my bobble hat and sheepskin coat, silhouetted against that Kinver Edge sunset.  It turns out we were already following each other on Instagram - the penny must have dropped for him.  Small world!  Luke's promised to share them with me when he's finished editing his other photos.

Our regular haunt, the Enville Estate, looks even more beautiful this week in mid winter.  Temple Pool, once a boating playground of the well heeled and well connected, was still partially frozen when we visited, much to the frustration of the resident grey heron (not in shot). 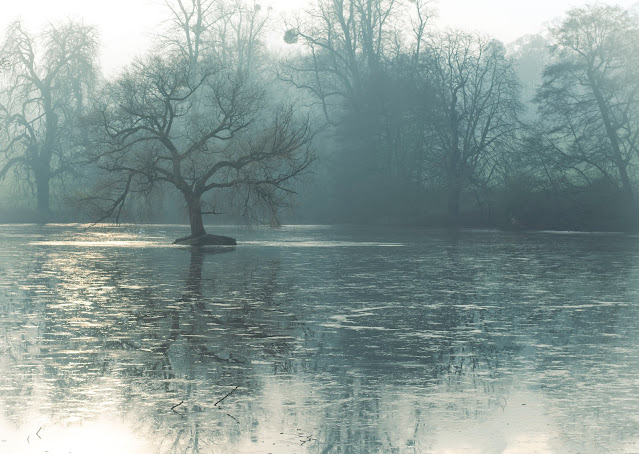 The Sheepwalks, an idyllic area of steep hillsides... 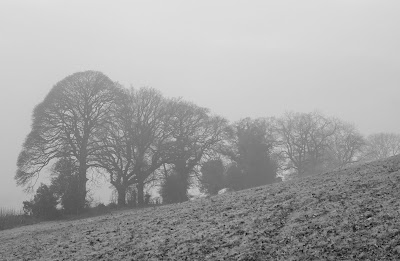 ...panoramic views and timeless-away-from-it-all loveliness, lived up to its name.  This woolly one was reflected in a natural pond on the hillside... 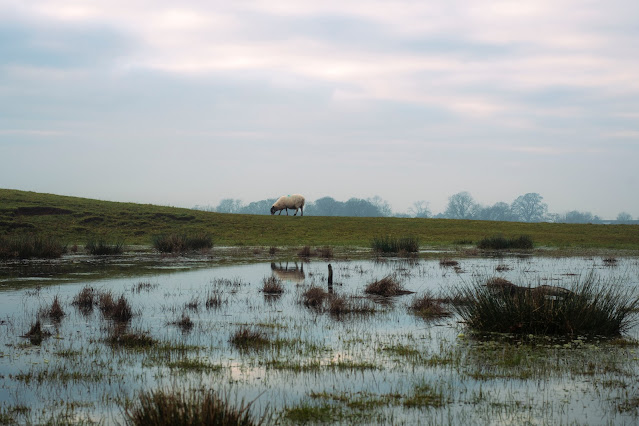 ....and here's the aforementioned Kinver Edge, visible from the ridge of the Sheepwalks, floating in the mist in the distance. 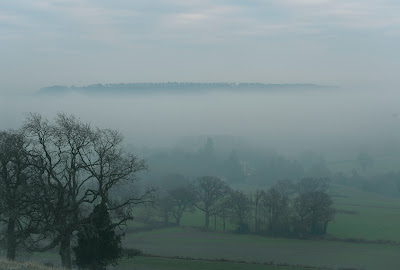 On the return leg of our walk, we passed the old cold bath house (circa 1790 and part of Enville Estate's old pleasure gardens)... 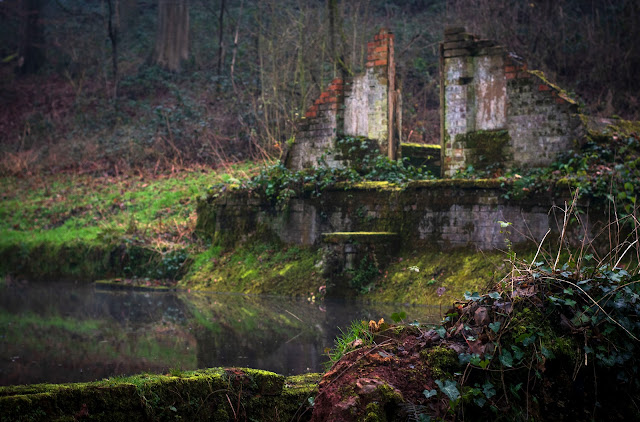 ...and spotted something sticking out of the boggy area surrounding the stream.  Considering it a danger to wildlife, we retrieved the offending item and discovered that it was an old enamel jug.  Now it may look to the untrained eye, that it's well past its use by date, but there was something about the patina and the arrangement of holes that appealed to us. 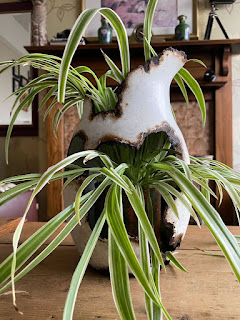 I've cleaned it up as best I can and stuck a spider plant in it.  They're reproducing at a rate of knots and the holes will give the spiderlings plenty of room to branch out. 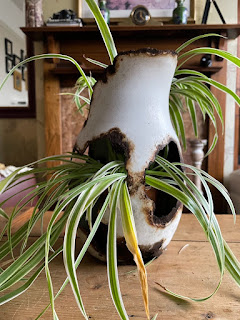 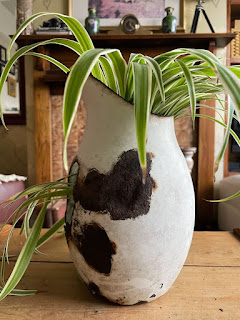 It may not be to everyone's taste, but it's certainly interesting from every angle.

Fashion-wise, recent weeks have been all about knits and patterns - not knitting patterns, but patterns of the botanical, spots and stars in your eyes kind.  It's curious that when spring's big fashion trend is colourblocking, I decide to embrace patterns, but then I don't tend to follow trends.  Instead, I keep a curious eye on them and only adopt them if I decide I like them.

First, the knit.  This cardigan reminded me of the cardigan worn by MM in her last ever photo shoot with photographer George Barris.  A couple of weeks ago, I did a little Marilyn inspired shoot, in an attempt to capture the lovely soft golden light of the original photos and showcase my thrifty find.  I do think this photograph would be greatly improved if it had been taken on the beach in Santa Monica, California, (not to mention if I looked anything like MM), but you can't have everything. 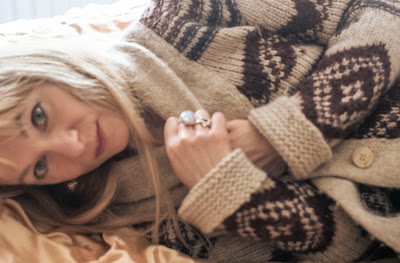 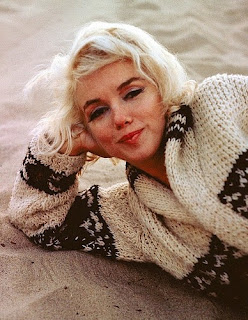 An Instagram follower and talented photographer, Diane Barlee, commented that it reminded her of the Cowichan sweaters from her Canadian roots.  For any interested parties, I'm sharing the link Diane sent me to an article devoted to the iconic garment.  Scroll down to the end for another pic of Marilyn in her Cowichan cardigan and "The Dude" from the excellent film The Big Lebowski rocking his.  Sadly mine is a High Street version, but being 50% wool, is very warm and toasty (and prone to pilling).  However, a real one has been added to my growing wish list.

With all of this fashion talk, you may be feeling dazed and confused.  But if you're not seeing spots yet, you soon will be.  At this time of year, naked branches, dead foliage and seed heads are particularly architectural and throw wonderful shapes in winter's monochrome landscape. 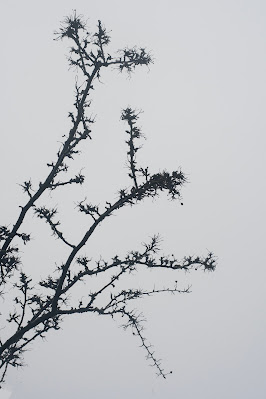 Nature's spots came in the form of this macro shot of these metallic looking seed heads (no camera trickery, just natural sunlight on paper thin foliage). 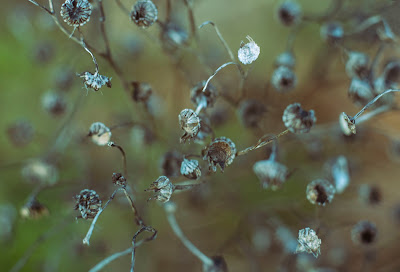 A short time later, I had the brilliant idea to combine spots with florals!  Now I'm not claiming ownership of the concept of combining patterns, but I'm starting to wonder if, rather than slavishly following the ideas of some anonymous senior fashion editor, I'm sometimes subliminally influenced by nature.  The resulting outfit (a Kharibu dress (thanks for the link Vix) and a spotted thermal jumper  ebay purchase) work quite well I think and have reminded me how much I love monochrome.  Thank you Mother Nature! 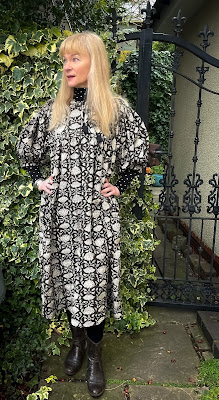 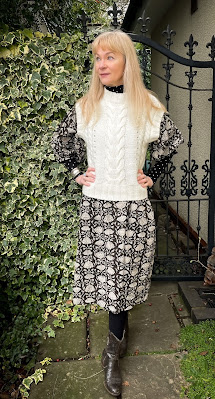 I haven't attempted any astrophotography recently, but I did capture the recent waxing crescent moon, photographed here from the street outside (you'll have to trust me on this one) using a cheap and cheerful (and clunky) 70-200 mm Tamron lens.  I really should do more of this. 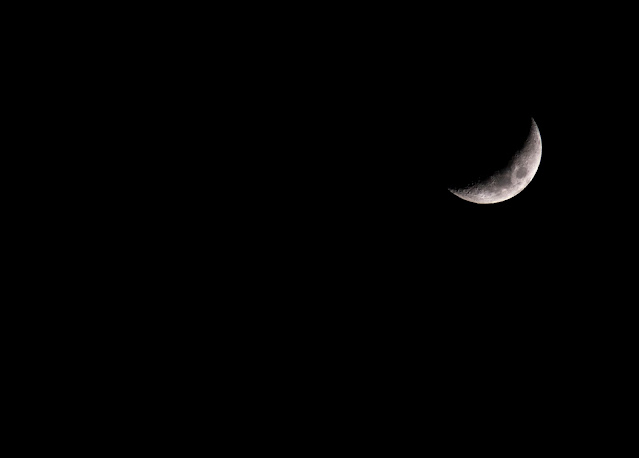 I love the night sky and when I spotted this starry Linea sweater in a charity shop, I had in mind a partner in crime for it, namely this vintage Alexon black and red check skirt with iridescent spots (which I thought was part punk/part skater girl). 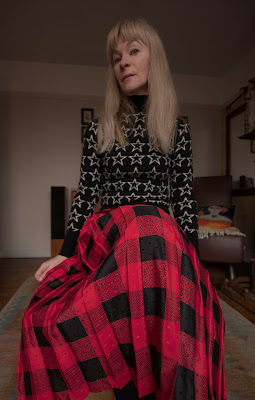 So, here we are again Friday.  We've finally got around to setting up our turntable (one speaker just visible in the photo above), after a campaign launched by the teen in the house.  We came along a little after the vinyl generation and in my childhood, I was mostly wired for sound courtesy of my Sony Walkman.  Later, my cassette collection gave way to cds and pretty soon, the idea of replacing my collection with vinyl was way too daunting, not to mention expensive.  However, we've done it and I have to say, the sound is incredible.  Our vinyl collection however, is virtually non-existent.  I have an old copy of Fleetwood Mac's Rumours and Gareth has a few stashed away somewhere.  But where to start?  Yet another excuse to trawl thrift stores and charity shops.

Have a great weekend and please feel free to leave a comment, or a recommended album for my shopping list!