This blog is going to be a little shorter than usual.  Well, let's see.  You know how I have a habit of digressing.

My week has mostly been swallowed up with work, anticipating GCSE results - with the usual side order of media fanfare and pressure - and trying against all odds to contact Severn Trent Water.  I won't bore you with the details and I'll park any negativity here.  This blog is going to be about small things and simple pleasures. On one of our meandering evening walks through the wood and around, the light was fantastic.  We've reached the time of year when sunny days and balmy nights start to become less frequent, so there's a heightened sense of appreciation when the clouds part, the wind drops and all is still. 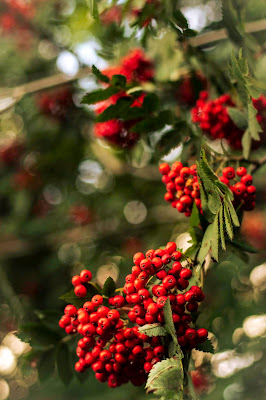 The Rowan trees are putting on an impressive display of berries, which should keep the thrush population happy. 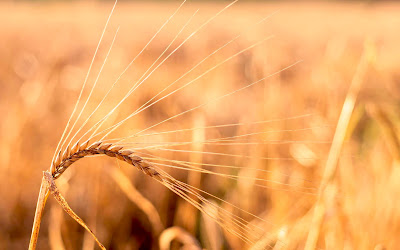 The barley looks resplendent with its impressive gold Mohican.
At the edge of the barley field, we discovered this little package. 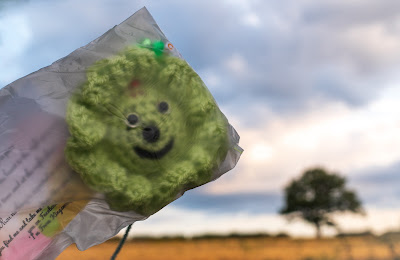 For the first time that I can remember, another neighbouring field has been used to grow maize this year, making the right of way passing through the centre much more interesting, as it obscures any view of the busy A449. 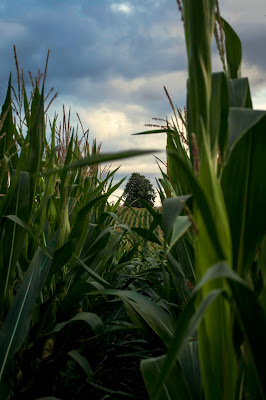 On our way back, the gaps between the wood's perimeter trees revealed stunning views of the fields and rolling hills of South Staffordshire (a county which apparently, we could be set to become a part of in 2023 - if proposed boundary changes take place).  The setting sun just kissing the blades of grass and highlighting a nearby farm house caught my eye.  I'm not sure how long we will be able to enjoy this view as a lot of this land is under the capitalist gaze of greedy developers.  I decided to upload this one to the BBC's Weather Watchers (principally to give the parents a buzz).  It made the late bulletin and, as is often the case with my photos, was uncredited. 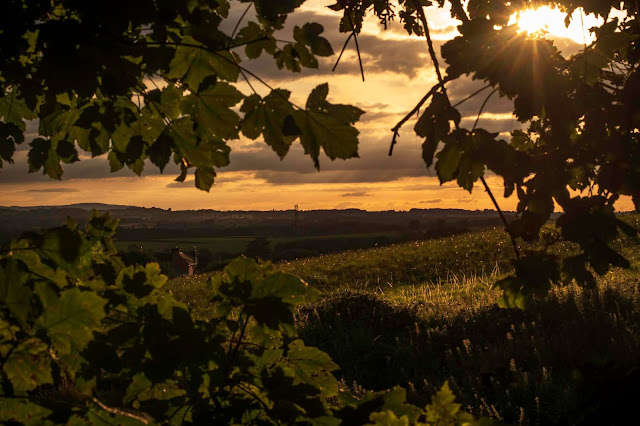 As soon as we got home, I opened the small package we had found at the edge of the field to reveal its contents; a crocheted smiley flower keyring with a sweet message inside. 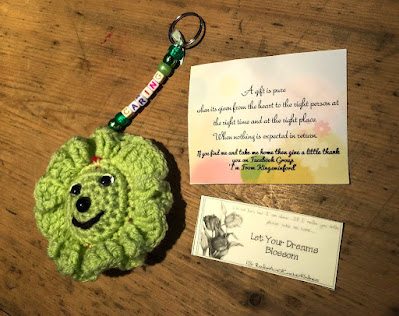 A random act of kindness that made me feel all warm and fuzzy inside (until I thought about Severn Trent).  It's also given me an idea.
Kicking off the weekend early, I took my mother on a trip to Stratford-Upon-Avon (roughly an hour away), the home of the William Shakespeare.  We parked in Shottery, a stunning little village about a mile west of Stratford and picked up the footpath into town.  We passed this man tending his gorgeous allotment. 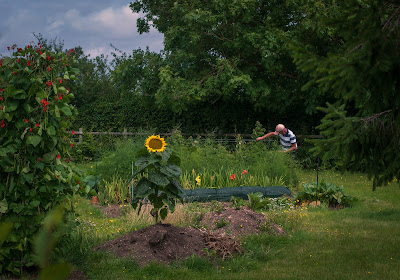 For some reason (probably the rust), this gate caught my attention.  Who said size doesn't matter? 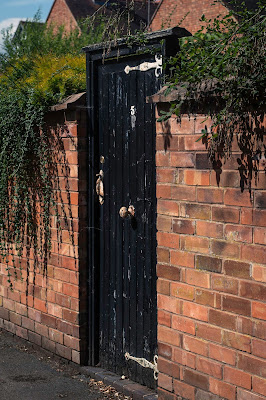 Shrouded by trees and just off a busy roundabout heading into town, we explored the Peony Pavilion set in Stratford's Firs Garden.  This caused quite a stir in Shakespeare's town when it was erected in 2019, with many residents labelling it an eyesore.  I quite like it, especially the sentiment behind it.  It was named after the great work of Tang Xianzu, who lived at the same time and died in the same year as Shakespeare.  To further cement the bonds of friendship, back in the Chinese City of Fuzhou, William Shakespeare's Birthplace is also being recreated.  The pavilion is considered a token of love, courtesy of Tang Xianzu's love story, which has been passed down through the generations over a period of some 400 years. 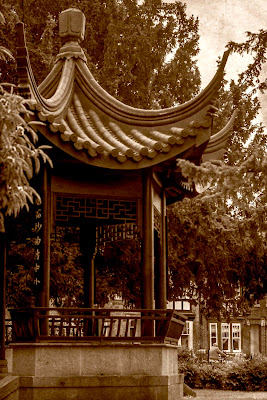 In town, I was relatively restrained with my photography - it's a real bore for any companion.  Plus, we were distracted by the charity shops.  Whilst the prices were through the roof - anything from £10-£65.00 - I did spot this East with FabIndia skirt for £6.00 and made it mine! 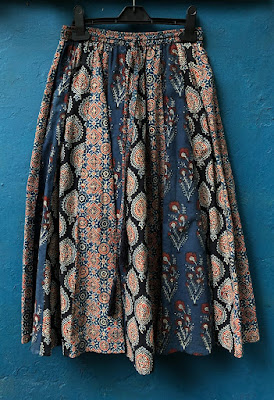 So little things, lasting satisfaction.
We ate our lunch (M&S sandwiches) in the park next to the theatre.  I surreptitiously photographed this couple, enjoying their fish and chips.  When in such close proximity, a flip screen enabling a live view is key to street photography - the photographer just appears to be looking down at the camera.  It's sneaky, but by far the best way to avoid any potential hostility.  I know I could just ask (and I have in the past) but I really want to avoid the forced pose. 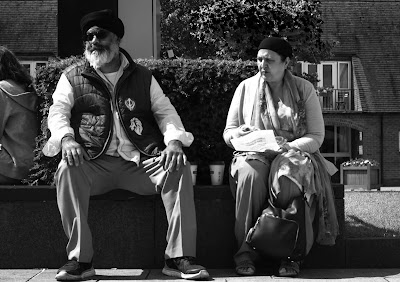 We later passed this bride and groom, although something tells me that this was perhaps not a genuine union. The bride had a face like thunder (nothing to do with me and my camera) and they were walking purposefully somewhere - with no guests in sight.  A photos shoot of some kind perhaps?  Who knows?  I did quite like the matching red tie and Converse shoes. 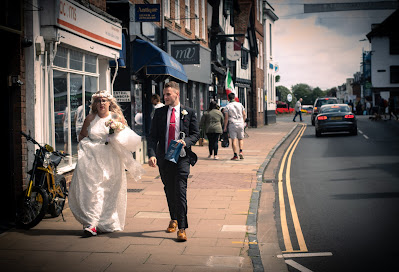 Talking of thunder, a moody sky and ancient architecture make a great combination. 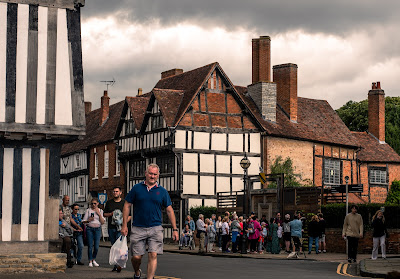 Finally, whilst enjoying our drinks outside a nearby pub, who should walk past the Bard's school, but the man himself, with a number of curious tourists in tow.  Talk about walking in the footsteps of giants! 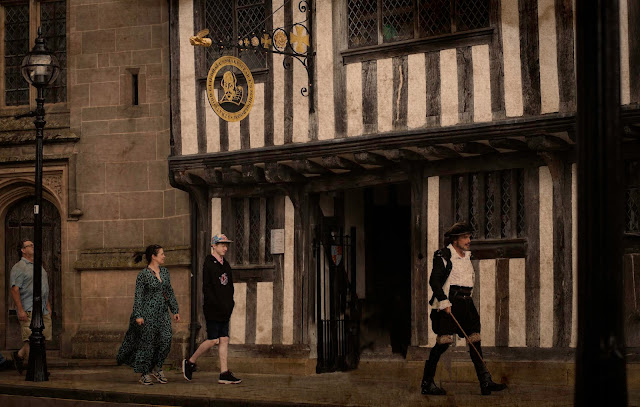 Last night marked a celebratory ("thank-God-the-exams-are-over-and-results-are-in") meal outside at our local.  We arrived in warm sunshine and left under gathering clouds and a chilly breeze.  Still, we managed to savour our food without being stung by a wasp or rained upon.
The Severn Trent issue was also finally resolved by a particularly friendly and helpful member of the team (a team in desperate need of greater staff numbers it transpires), which made me feel a little guilty for my social media assault on the company.  It's a crazy world now.  We have greater means of communication but when it comes to customer service, it's seemingly impossible to achieve a resolution.  Phone calls go unanswered or remain on hold for hours, forcing simple queries to be elevated to the status of a formal complaint.
Finally - and this will give me lasting satisfaction by making me chuckle inwardly for some time to come - last night, when settling down, drinks poured, to watch another episode of The Trip to Greece (Rob Brydon and Steve Coogan), Gareth called through from the kitchen that he had bought some falafel.  I shouted to him to repeat it a grand total of three times with the words: "Some what?" to which he responded with increasing frustration: "Falafel!" before he realised that I had morphed into This Country's Kerry Mucklow.  How I laughed.
Until next time! x
at August 14, 2021