Every year I find that I am drawn to a certain colour.  Is it just me?  It's all very mysterious, but for some inexplicable reason it happens as sure as the sun comes up each day and, half way through the year, I will suddenly notice that my clothes rail for example, is awash with a certain colour.

I can officially declare that this season's colour (as far as I'm concerned) is pink.  It all started in the garden.  Now I'm by no means a fashion victim.  I buy what I like and our outside space is no exception to this rule.  That said, if I had the perfect aspect garden with plenty of sun, I would favour darker, more dramatic coloured flowers; black tulips, blue hydrangeas, chocolate cosmos, etc.  I wouldn't necessarily choose pink - or yellow for that matter, although I do love spring daffodils.  But our garden has other ideas and lots of shade to boot, so many of the flowers I love probably wouldn't love me back.

On a whim earlier on in the year, when nothing was in flower and we were all walking around with our heads in clouds and our feet sinking in the mud, I bought a pale pink sun lounger on offer in Sainsburys.  In retrospect, my subconscious was probably drawn to a colour that is the very antithesis of British gloom and what better colour than pink?  You may recall I also painted our bistro table and chairs a shade of pink - Raspberry Sorbet to be precise.

Since then, nature's had some input.  The foxgloves have flowered. 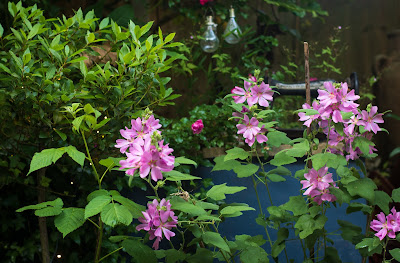 Now the lavatera is putting on a show.  Suddenly, in our garden, pink is having a moment. 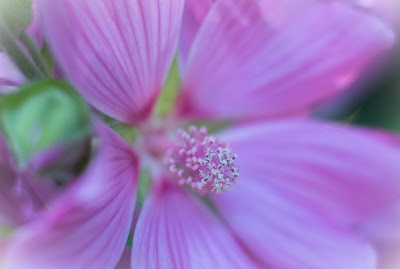 As for the wild pink geraniums.  They appear every year and everywhere and when you consider that Ashwood Nurseries sell potted wild geraniums for £10.00, we're happy to embrace them.  I've just pruned them back to ensure a second late summer bloom. 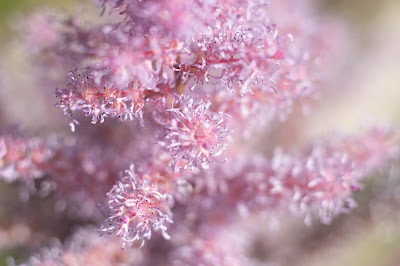 This false goat's beard seems happy next to the pond and provides a touch of kitsch 1970s garden styling.  All I need is to arrange a "Brangelina" style photo shoot in the garden on the pink lounger with a huge beachball and an inflatable pink flamingo, cocktail in hand.  Maybe that's what Gareth was getting ready for the other day when said lounger, with little in the way of warning, frayed at the edges and sucked Gareth unceremoniously into the upside down (one for Stranger Things fans).

Back to our garden and all things pink, our sweet peas have also finally started to flower.  I bought a mix of grandiflora types dating back to 1900s as they contained some dark purple colours, but no prizes for guessing the colour of the first one to flower?  Pink, of course.

Prompted by Vix, I bought some pink tinged Mexican Fleabane. 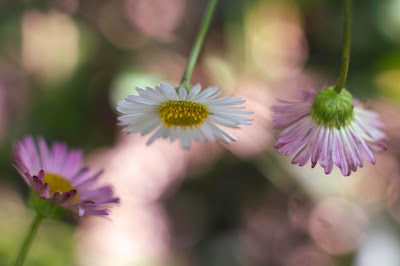 Who doesn't like a daisy-like flower and for a big garden, anything pretty that is said to "spread like wildfire" is welcome...unless of course, it's bamboo and then it can do one!  After a recent encounter with a couple of pigs - not Pinky and Perky, but Biscuit and Butterscotch - at Vale Head Farm, a small biodynamic farm in nearby Kinver (more on this below below), I Googled the question "Do pigs eat bamboo?"  (That's a good one for the internet history).  I'm pleased to confirm that they do root out bamboo and as we all know, goats will eat anything, so if I ever feel totally panicked by our bamboo and its relentless growth spurt gives me sleepless nights, I can remind myself of these facts and give serious consideration to starting a smallholding.

I knew very little about Biodynamic farming before we literally stumbled across this small local farm on one of our recent walks. It still don't know an awful lot, but it's is a form of alternative agriculture very similar to organic farming.  However, it includes various esoteric concepts drawn from the ideas of Rudolf Steiner. 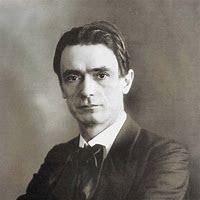 Rudolf Steiner (1861-1925) was an Austrian philosopher, social reformer, architect, esotericist, and claimed clairvoyant.  We have a local Rudolf Steiner school in fact (attended by a couple of my relatives and, I believe, Robert Plant's son).  A Steiner education takes account of the needs of the whole child - academic, physical, emotional and spiritual and sees artistic activity and the development of the imagination as integral to learning.  The "taking as a whole" principle is also applied to biodynamic agriculture.  Initially developed in 1924, it was the first of the organic agriculture movements. It treats soil fertility, plant growth, and livestock care as ecologically interrelated tasks, emphasizing spiritual and mystical perspectives.

Some methods use an astrological sowing and planting calendar. Biodynamic agriculture uses various herbal and mineral additives for compost additives and field sprays; these are prepared using methods that are more akin to magic than crop production and soil management, such as burying ground quartz stuffed into the horn of a cow, which are said to harvest "cosmic forces in the soil".  Unsurprisingly, it has been labelled as pseudo science by some, but whatever methods Vale Head Farm utilises, it exudes an atmosphere of peace and tranquility, there seems to be a coherent plan and the animals appear content.  It's hard not to be intrigued by the concept. 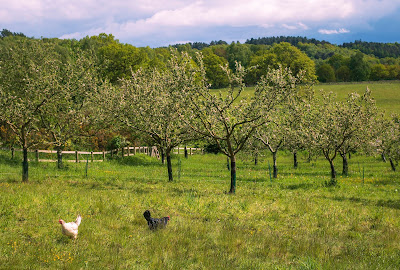 My own reading material has been confined to Joanna Lumley's No Room for Secrets, which I can thoroughly recommend.  Whilst I like Joanna, enjoyed her in Absolutely Fabulous and have caught a few of her travel documentaries over the years, I wouldn't necessarily have elected to read her book.  However, a family friend passed it onto me and I was intrigued by the concept of this well written, autobiographical book.  I enjoyed getting to know her by participating in a guided tour of her house via its pages, discovering her London property's contents (she's a bit of a hoarder) and hearing the stories and memories her personal possessions invoke.

In one of the chapters, centred on the dressing room, she recalls memories of her favourite designers and labels from her modelling heyday.  Jean Muir was a firm favourite and Joanna maintains that she was hard to beat for her dressmaking skills and the sheer quality of her garments.  She also references Kings Road Boutique Granny Takes a Trip and another boutique with carrot in the name which now escapes me.

In this photo (one of my favourites from the book), she is wearing a dress from Granny Takes a Trip.  She also loves cats and is an extremely empathetic human being, so I think she's alright! 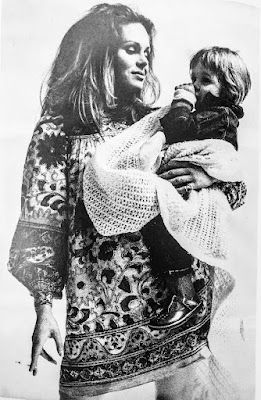 Somewhat inspired by her, although clearly not expecting to find anything from Granny Takes a Trip (rare and hugely sought after now), I decided to have a nose on Ebay for something interesting.  Recent searches have proved fruitless, but this time, I came across a gorgeous 1970s dress by Mina of England Carnaby Street.  I made the seller an offer which was accepted and so I await its arrival with bated breath.  If you're still with me, you might be wondering what it's like.  Well I'll tell you.  It's pink!  I'll endeavour to share a photo in my next blog.

Incidentally, Granny Takes a Trip also featured in this week's Secrets of the Museum on BBC2 - specifically a red lurex suit previously owned by Slade's Jim Lea.  According to Jim, every time he waved his arms around, which was a lot when you were a member of a 1970s glam rock band, the suit jacket arm seams would split and off he would trot to Granny Takes a Trip to purchase a replacement.  Apparently he got through at least a dozen jackets and was, for a time, one of the boutique's best customers.

In other fashion news, this week I became the proud owner of a Pony-O Bun Bar.  It's the brainchild of an American company, although they now have a UK supplier.  The pony-O is designed to give you a more voluminous looking ponytail by virtue of simple bit of tech.  The Bun Bar works on the same principle.

It's basically a large bendy two pronged tool which gives you a bun in seconds without the need for hair elastic, pins or indeed a mirror.  For someone like me who has always struggled to maintain a decent bun without getting a headache, it's been a gamechanger. 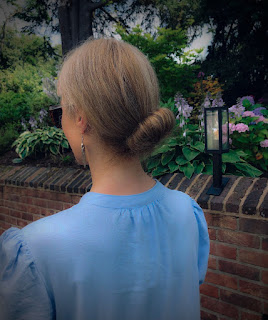 Here's the link for the long haired amongst you. BUN BARZ – PONY-O

In other news, the frogs are multiplying - 3 at the last count. 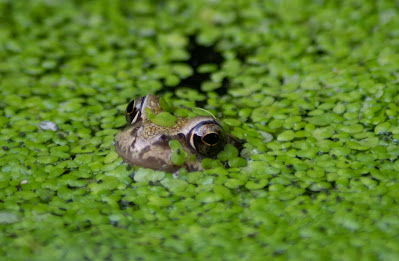 These are either very large wasps or hornets.  Whatever, they were having a good time... 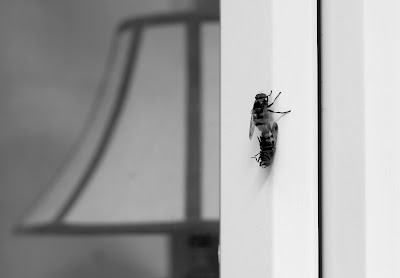 ...and they weren't the only perky ones.  We did manage one short walk the other day in the heat, which was surreal for a couple of reasons.  Firstly, I was again experimenting with intentional camera movement, stopping periodically to get some slightly abstract shots of the numerous silver birch trees in the woods surrounding Highgate Common.  The second reason was perhaps a sign of the times. 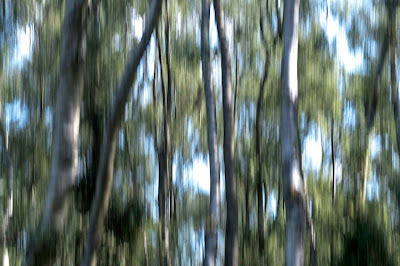 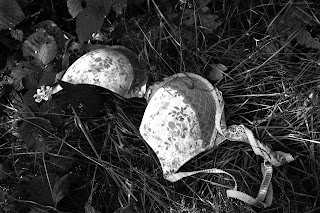 I was quite relieved when I eventually spotted the man return to the lane with all the parked cars and we reached a more familiar path, although we did notice a mobile phone number scrawled on a piece of paper and weighted down by a rock in the middle of the path.  No message, just a number.  I have my suspicions.

I think the heady combination of a heatwave and the releasing of restrictions has sent everyone a little crazy over the common.  Still, we're set to have the mother of all storms to end this unprecedented spell of hot weather over the weekend.  Gulp!  Hopefully that will dampen both earth and ardor a little.

In the meantime, when sleep evades me, I've been roaming the street outside, looking for good night sky vantage points, pursued by my ever present, but useless photographic assistant, Lotte the cat.  Try as I might, she seems distinctly uninterested in learning how to carry a tripod! 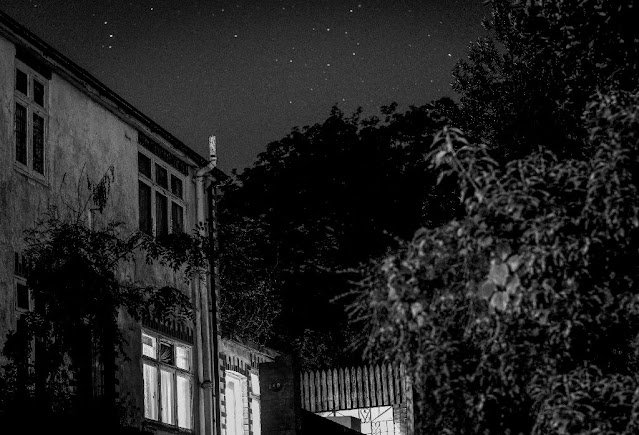 Have a good weekend and please feel free to pass a comment!