A Tale of Two Halves

There's nothing like the Great British Summer (climate change aside) to remind you never to make assumptions in life.  You may recall from last week's blog (Winter Peach Photography: Time Bending), my video of the torrent of water running through the wood.  It was a rain storm of biblical proportions and made me at least as wet as if I had driven a Rolls Royce into a swimming pool, which would have been my preferred method of saturation, as opposed to traipsing through an area of woodland with denim clinging unceremoniously and in a deeply unflattering manner to my dripping flesh.

With the wet weather and slug assault on the garden in full force, I assumed summer was over....until the TV weather people started offering seductive glimmers of hope in the shape of a promised weekend of sizzling sunshine.  How fortuitous that we had arranged to see our friends Vicky (Vintage Vixen (vintagevixon.blogspot.com))  and Jon for the first time in way too long.  Today's blog, like the England vs Italy final, is a game of two halves. 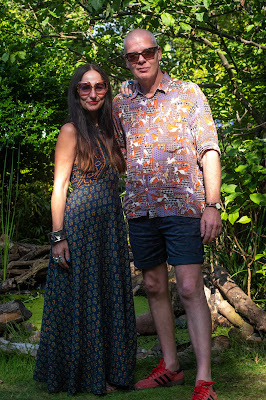 I'm typing this in a cotton sun dress in 28 degree heat and basking in that special kind of Friday afternoon glow, courtesy of a pub lunch out (an alien concept these days, but only a short distance from our garden gate)... 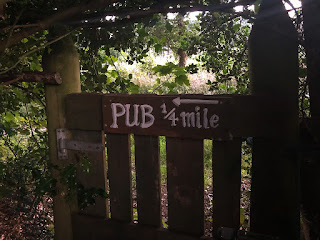 ...a monumental catch-up on a canal side walk and cheeky Friday afternoon gin (home measures) in the garden.  Suitably convinced that summer's back on, I can now bring myself to share with you some alternative photos from our recent trip to Devon.  After watching Rankin's recent TV photography challenge, I decided that I should try a warts and all approach to my photography and not just seek out the pretty pictures.  So here are a few bleak shots you won't see in a holiday brochure any time soon.

Here's a bench, a little way up Mars Hill in Lynmouth (trust me, you will need a rest even a third of the way up this hill) reclaimed by nature. 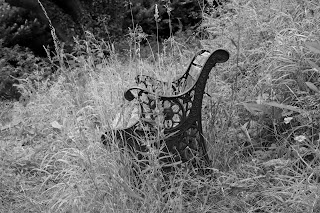 Being by the coast isn't all pastel coloured beach huts, glistening sand and sea shanties.  Seagulls are a growing menace and now, your average seagull is almost as big as an albatross.  Fact.  Conspiracy theorists (and there are plenty of those around now) might prefer to think of them as government drones.  Either way, they are great, white winged brutes. 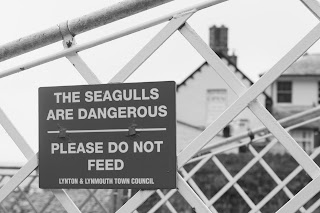 Again, don't make assumptions.  One morning, we awoke to this - rolling sea mist - enough to bother any seaman trying to reach the harbour.  Within the hour, it had vanished. 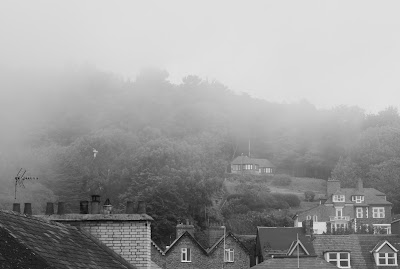 Out on the wily, windy moor. 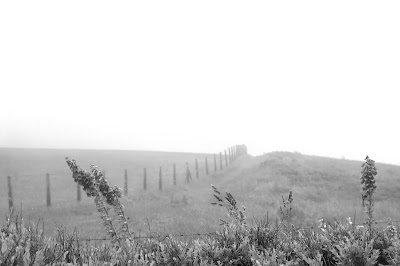 Run aground at Crow Point; a ship wreck retreating into the sand near Braunton. 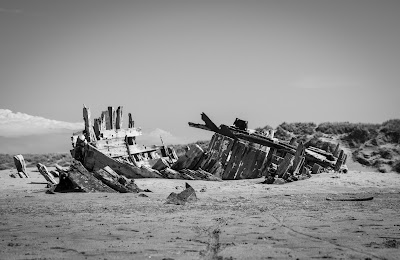 A rear view of Damien Hirst's "Verity".  This was the best shot I could get given the people swarming around this infamous sculpture, on loan to the town of Ilfracombe for 20 years from its famous former resident. Graphically showing  the foetus in her womb, Verity's not for everyone and caused controversy when it was unveiled in 2012.  Whatever your view, it's certainly striking and thought provoking.  How dramatic does she look, sword held aloft, looking out to sea? 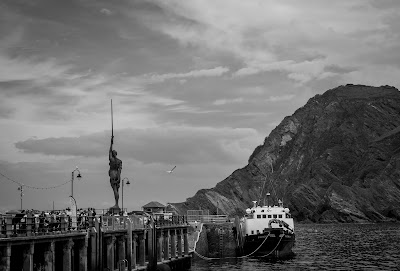 Here's a shot of the sea....and not much more.  Coastal minimalism. 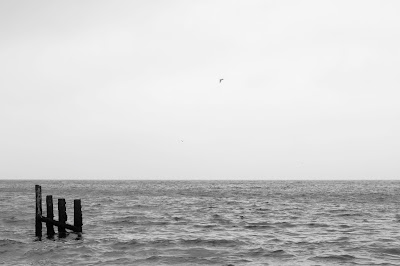 Given that this might be our last holiday with Covid restrictions in place (officially anyway), I thought I should record some of the signage for us all to look back on post Freedom Day (or collectively cry in our coffees to during their reappearance during the next lockdown).  Here's the distancing reminder on the approach to the funicular railway... 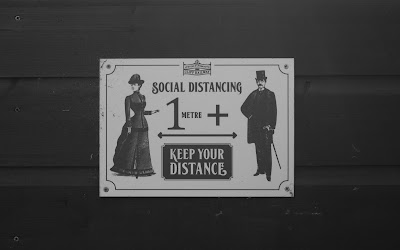 ...and here's a rather creative way of marking out queueing distances outside the chippy. 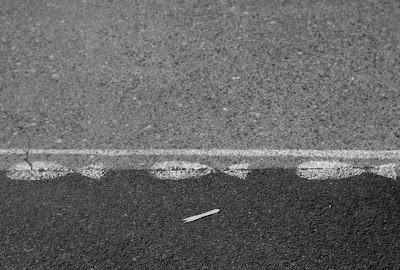 Hats off to the Ancient Mariner Hotel in Lynmouth for this humorous set of instructions. 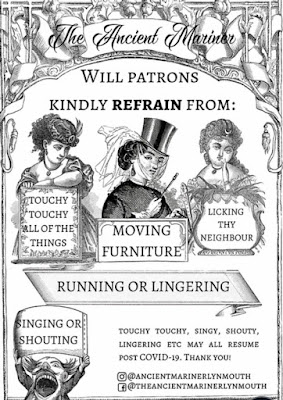 Finally - and you certainly won't see this on the Tourist Board website, but it happens in every city and in every town nationwide - leave a pane of glass long enough to gather a layer of dust and someone will feel obliged to inscribe a succinct message on it.  This pretty much summed up my feelings after the Euros final last Sunday.  That's not a comment on the players' ability by the way - more the pervading mood on Monday morning. 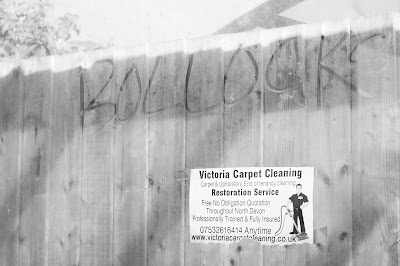 Still, enough of all that.  Back to colour.  I also took some time to capture the beautiful flowers in and around our holiday digs.   Roses were everywhere.  This beauty shed its petals in the churchyard, thus creating a faded pink carpet of rose petals; a second coming of sorts. 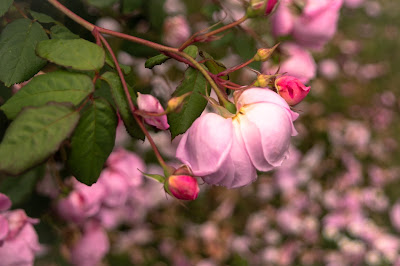 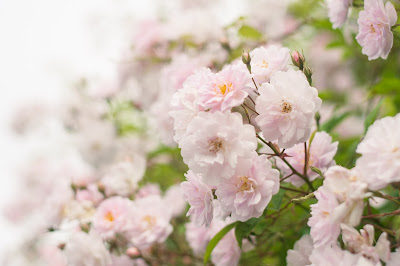 The foxgloves were still alive and kicking. 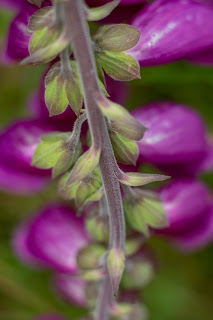 Along the coastal path, we spotted Sea Campion..., 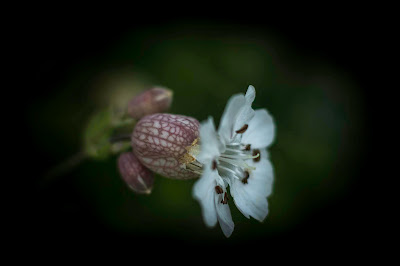 ....this pretty English Stonecroft succulent (I Googled this by the way), 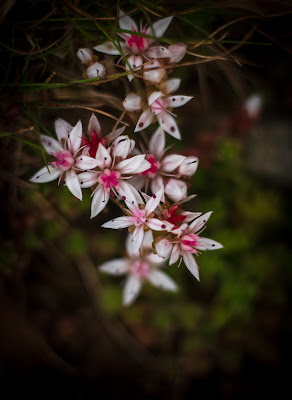 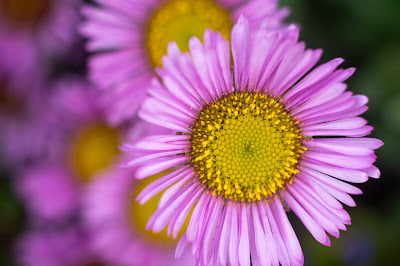 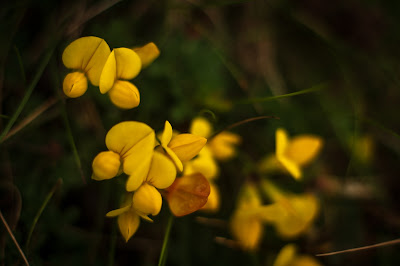 Evening Primroses also grew in abundance in the dunes at Crow Point, near Braunton - part of the Braunton Burrows Nature Reserve; a peninsula extending into the Taw and Torridge estuary. 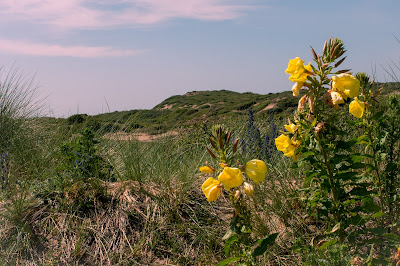 Perhaps this is a good place to leave Devon and its delights.  Here's a photo that reminded me of the 1980s film starring Emily Lloyd, loosely based on the formative years of the eccentric suburban brothel keeper Cynthia Payne.  The film's title could also be the quintessential holiday postcard slogan for this image - Wish You Were Here. 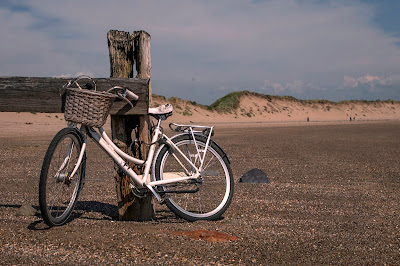 Before I go, I'll leave you with this song from the successful young Irish band Inhaler, fronted by Bono's son, Elijah.  Their debut album has gone straight to number 1.  I think his voice definitely has echoes of his father's.  I quite like it.

So it's goodbye from us.   Here's to a splendid weekend.  What are you up to? 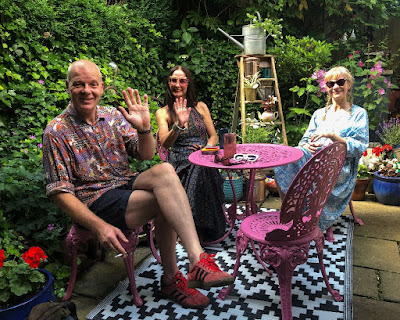