On a Heritage Trail

Last week I caught a cold (repeated negative LF tests) and anyone who has had a common cold recently will know that its symptoms are more severe and last longer than the average virus, courtesy of our immune systems having been protected for the past couple of years.  Consequently, I have mostly been haunting these four walls like a congested ghoul with lank hair, dark circles under my eyes, near constant fatigue and prone to the odd, unexpected sneezing fit apt to scare the living daylights out of anyone within a 10 metre radius.
But let's not dwell on that.  Before I caught said cold, we took advantage of the Easter weekend sunshine to take some exercise - a seven mile circular walk taking in a stretch of the local canal.
Our starting point is Ridgehill Wood (just beyond the garden gate).  I've shared numerous photos of the woodland on here before (most recently back in November)... 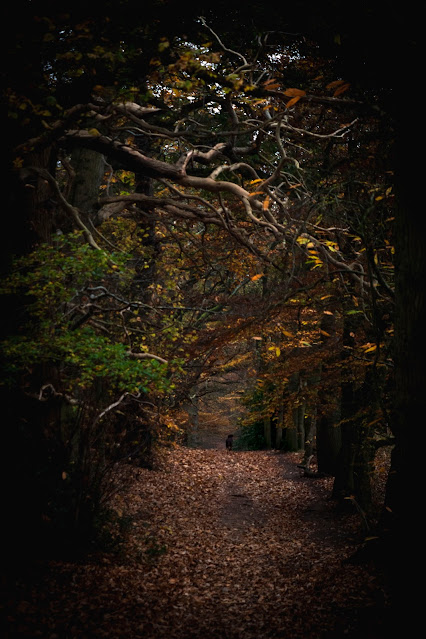 ...but for this blog, we're going to keep our eyes down.
Recently, the Black Country Living Museum launched a competition to coincide with its "Forging Ahead" development; a multi million pound expansion taking the museum's story into the 1940s, 50s and 60s.  As part of the development, a replica brickworks (loosely based on the Cricket Field Colliery in nearby Brockmoor) is being built and the museum is seeking stories from people who had associations with the brickmaking industry in the 20th century.  To help promote this drive, the "Black Country Brick Hunt" competition was launched, encouraging people to share their photos of any Black Country bricks they discover.  Given that Black Country bricks have been transported and used worldwide, this could get interesting.  The competition details can be found here:
Join the Forging Ahead Black Country Brick Hunt! - Black Country Living Museum (bclm.com)
The most interesting entry wins.
Our humble area of woodland is home to some Black Country bricks, forming a makeshift path along the Eastern boundary, which has been in place for as long as any of us can remember.  No one knows why for sure, but one theory is that the original owner of Lawnswood House (built circa 1813 and now The Roe Deer pub)... 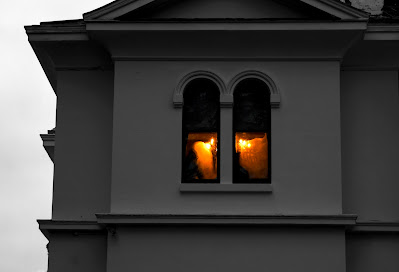 ...instructed that the bricks be laid to enable a horse and cart to more easily navigate the muddy path through the wood, which also formed part of the estate, to transport timber for his woodland summer house.  First up, a Harris & Pearson brick.  This Stourbridge company's brick making origins date back to 1739 and its handsome 1888 built office frontage is just a mile or so up the road from us. 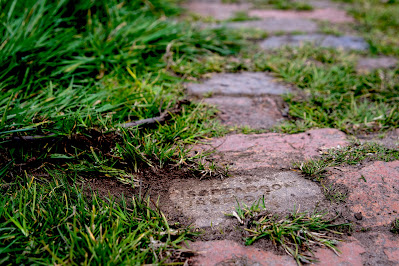 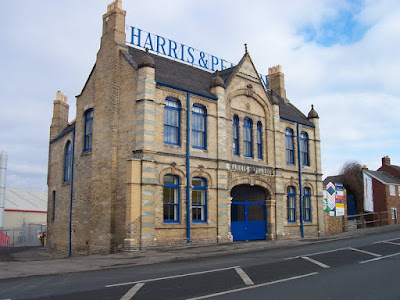 Another Stourbridge made brick with part of the name "Homer" visible. 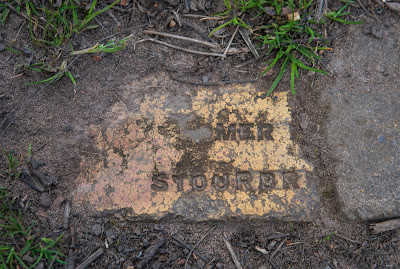 Finally, a Utopia brick, which I believe would have been produced by the Aldridge Brick and Tile company closer to Vix in Walsall. 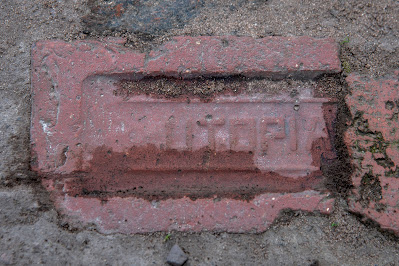 We headed down the local farm track towards Ashwood Marina.  How beautiful is this tree, shedding  blossom in its shadow to light the way? 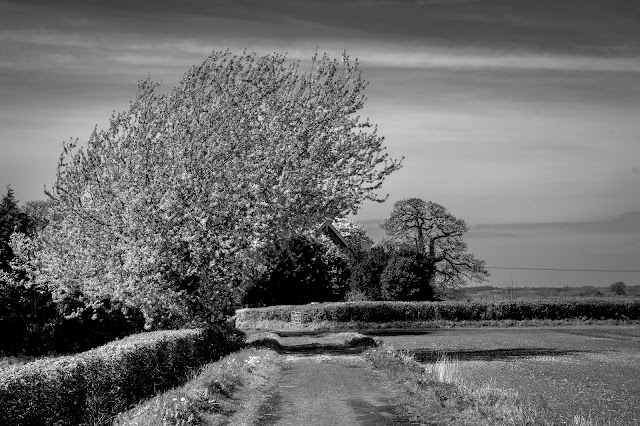 A glimpse from the local Navigation Pub, of a stunning example of Victorian architecture owned by the Enville Estate (now mixed use premises), just a short walk away from the canal towpath. 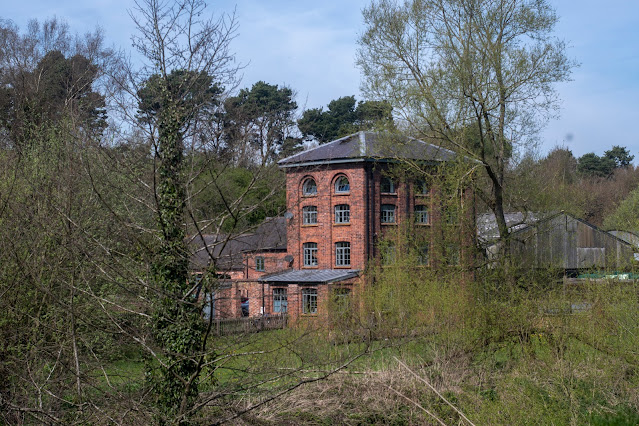 The aim was to walk to The Bratch, a local historic bridge and pumping station.  However, we hadn't accounted for the intensity of the heat that day and so soon abandoned that plan for fear of sun stroke.  Another time!
Canalside, the usual visiting and resident narrow boat permit holders were out in force and there was a distinct holiday atmosphere.  This boat, with its canine watchman, was pumping out Bob Marley and the Wailers... 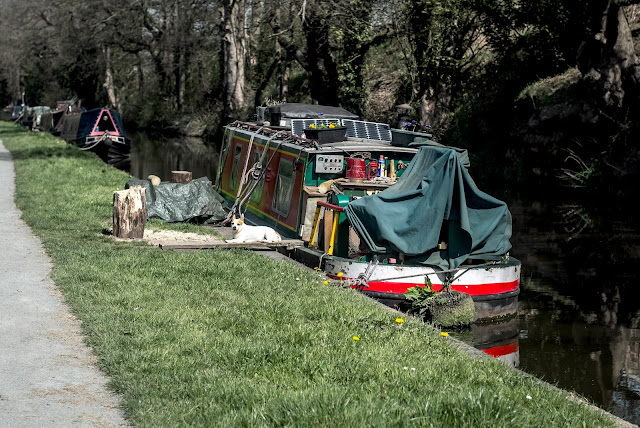 A couple of boat signs caught my eye.  The first provided a succinct summary of the day's weather... 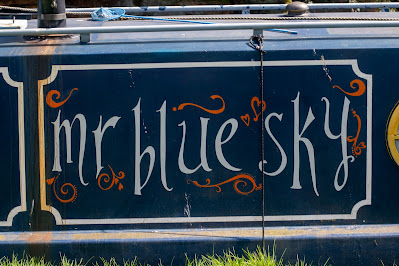 ...and, at around the five mile mark, another made me quicken my pace towards home at the suggestion of a long, cold beverage. 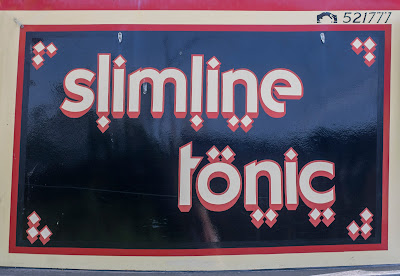 Bow to stern with its posh cousins, was this trippy narrowboat, its abstract green and yellow street art style paint job blending perfectly with the dandelions. 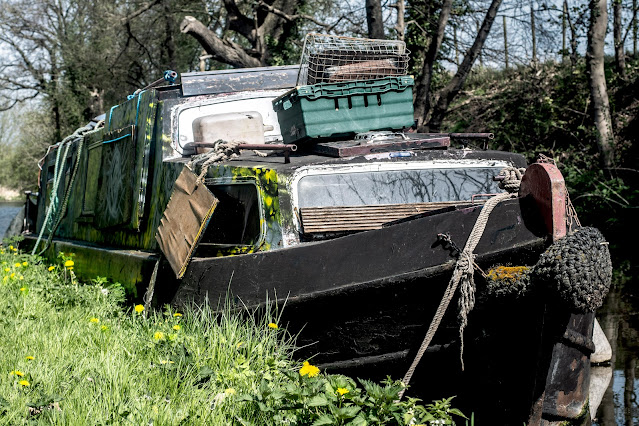 Passing the mobile home site at nearby Hinksford, call it a sixth sense if you will, but we detected some tension between the residents and the local fishing community.... 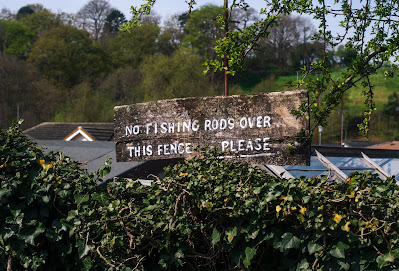 On the lanes around Greensforge, I was able to capture a sure sign of spring... 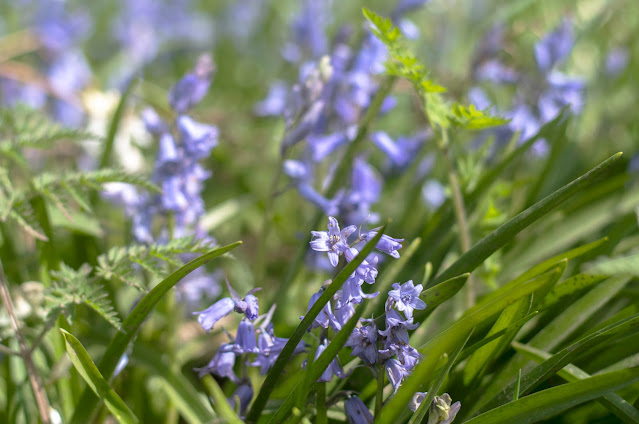 and indulged in an impromptu spot of brand content creation to promote wild elopements photography. 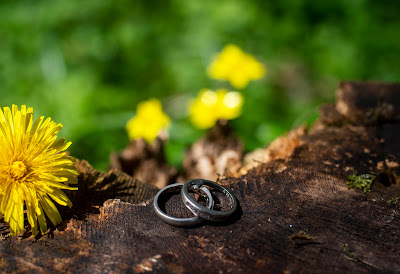 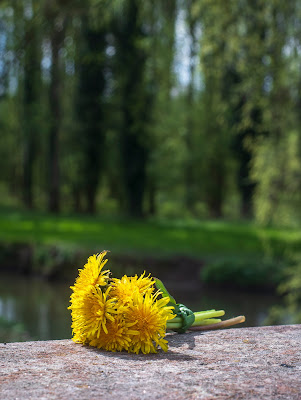 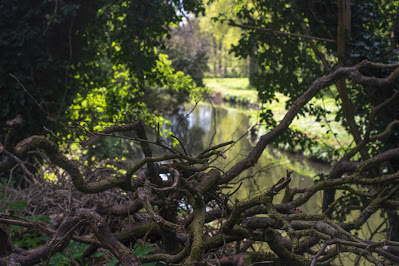 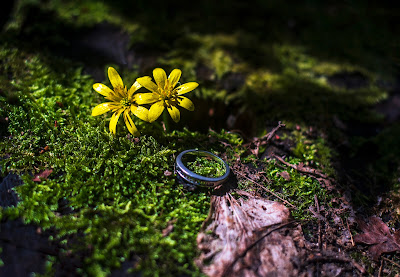 Since my last blog and closer to home, we've had some spectacular cloud formations (viewed from the top of the house)... 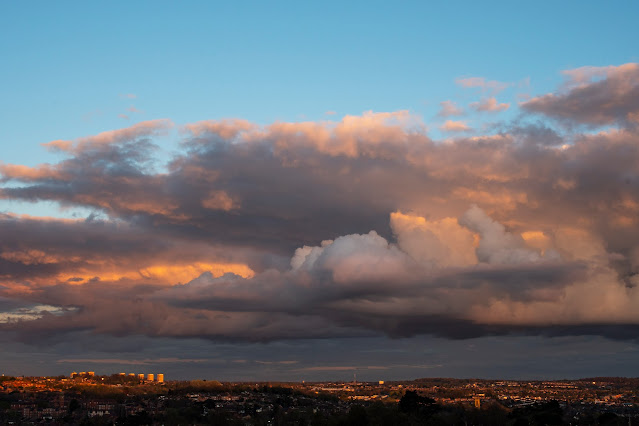 ...dancing gnats (a good indicator of warm weather ahead)... 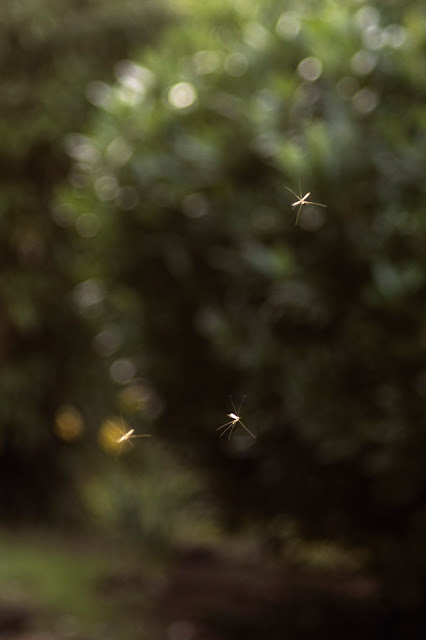 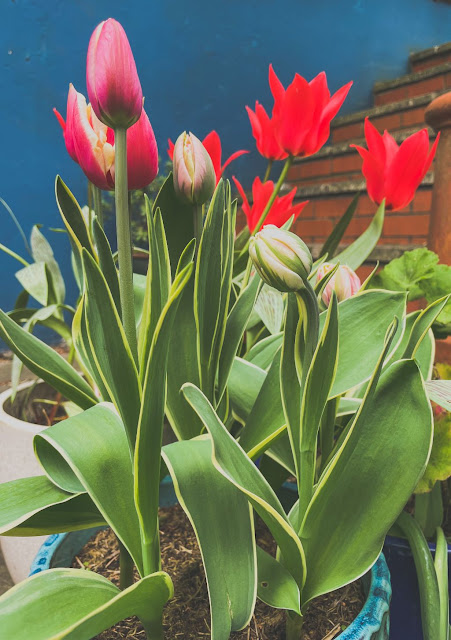 ...and a pond full of tadpoles! 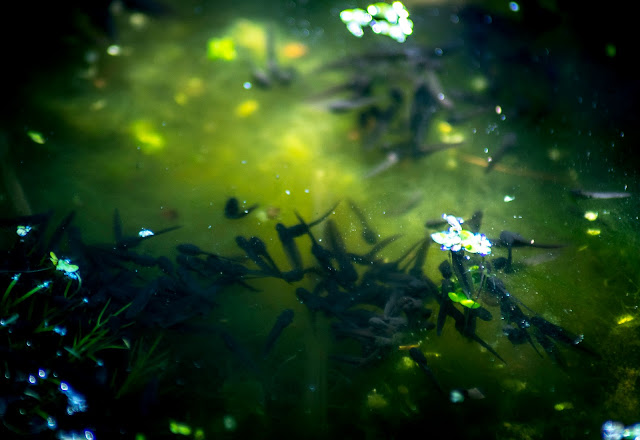 Plus, cold or not, I still managed to bag a couple of preloved beauties for my clothes rail.
This Hush top would have retailed for £69.00.  I had change from £3.00! 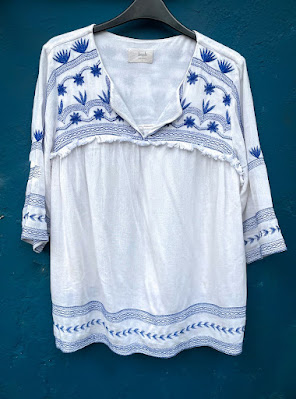 On a vintage rail in a local Antiques Centre, I also spotted this Indian cotton dress lurking amongst a sea of man made fabrics. 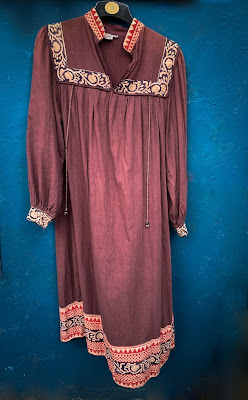 It's lived a life in that it has a little sun bleaching across the tops of the shoulders, but that is barely noticeable when its on and after a little negotiation, I was happy with a £7.00 price tag for a dress that's no doubt visited some pretty exotic locations in its time.  Unique, sustainable and with decades of untold stories hidden within its fabric.  Just perfect!
See you soon!
at April 23, 2022