I finally got around to seeing a matinee performance of Belfast last weekend, the Kenneth Branagh directed film based on his childhood during the troubles in Northern Ireland. 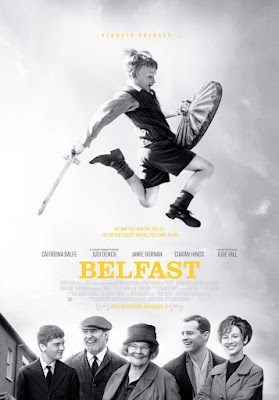 I can't include enough superlatives to describe this film.  It was, in my opinion, a perfect piece of cinema; big, brooding skies over Belfast cityscapes, stunning cinematography, great performances (notably from Ciaran Hinds and Jude Hill), innovative and impactful use of colour in a black and white film steeped in nostalgia and whilst the subject matter was rooted in a dark period in our history, it was treated sensitively and somehow remained largely uplifting.

My only quibble would be the soundtrack, from Belfast's most famous son, Van Morrison.  Whilst I love many of the man's songs (having been introduced to him by my A Level English teacher, who drip fed me cassette tape compilations of his music), his reputation has been somewhat tarnished for me, given his stance during the pandemic and ill timed anti-restriction protest songs.  Still, you have to separate the art from the artist as they say.

Monday marked Valentine's Day.  We don't do enforced celebrations, so usually just exchange mildly abusive cards.  Plus, our Valentine's Day celebrations are forever reserved for the more momentous occasion of our son's birthday.  The timely arrival of a provisional driving licence through the post on Valentine's morning, could not have been better, especially as we had only applied for it a few days earlier. 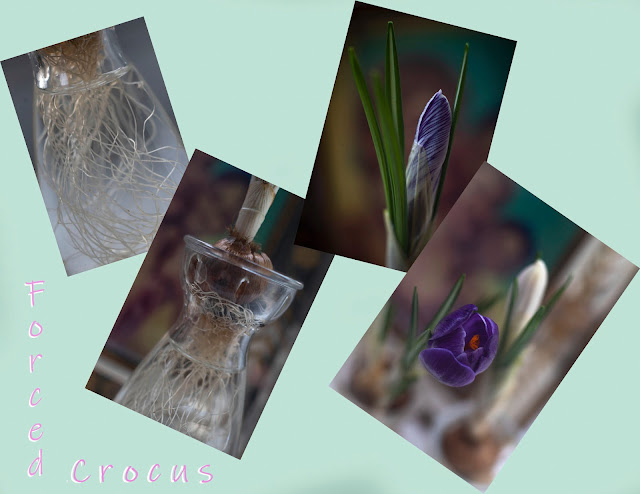 These little crocus bulbs were placed in their vases 10 weeks ago, where they remained, hidden in a darkened outside drawer, devoid of light and regularly topped up with water.  Late last week I brought them inside and into the light and the first blooms appeared on Valentine's Day.  Call it serendipity.  Two miracles of nature!

Outside, after yet another leaf raking session, I noticed that the woodland bulbs we planted are beginning to poke through.  Hopefully this will ensure we have some colour for a little longer.

As is to be expected for this time of year, the garden is displaying remnants of winter's assail and positive signs of new life.

I always leave the lace cap hydrangea flowers alone as I think they are just as beautiful in their wintry paper form as they are in full bloom. 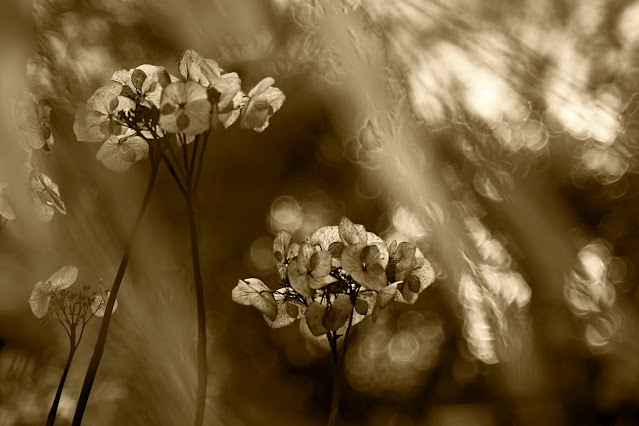 The wood pigeons are a permanent fixture in the oak tree and... 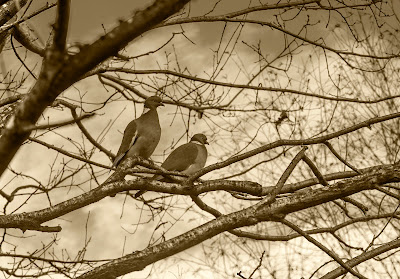 ...I heard them before I saw them; a group of long tailed tits visited in Wednesday morning's all too brief sunshine.  They are noisy, gregarious little birds.  I just managed to capture this one awaiting its turn on the fat ball. 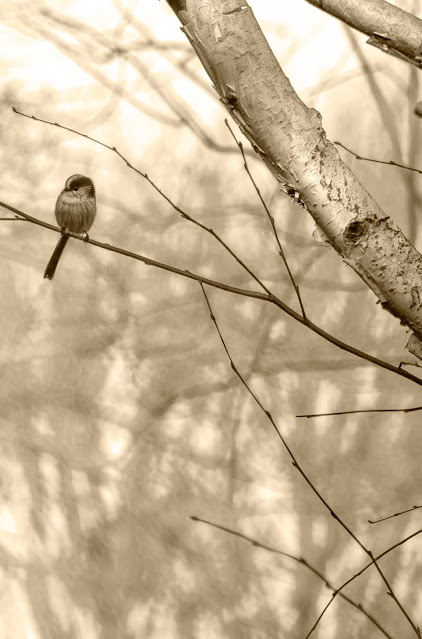 In other news, Valentine's Day was not lost on this pair of frogs. 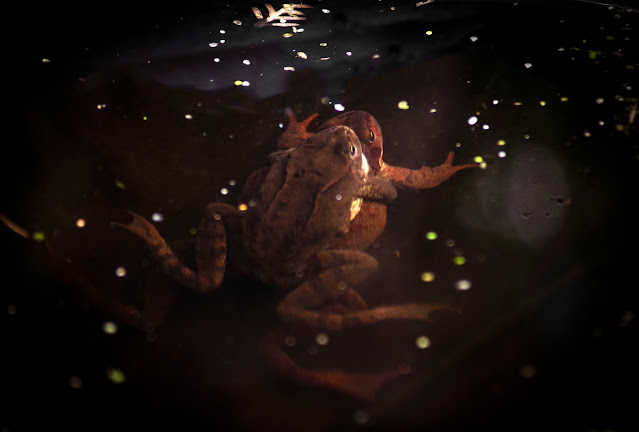 The grapes are doing incredibly well for February! 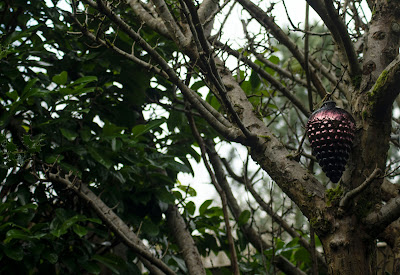 Following last week's blog post, the Red House Glass Cone shared the post and left a lovely comment on my Twitter feed.  It's nice to feel appreciated, but I genuinely feel that our corner of the Midlands is somewhat under-appreciated.  Inspired by my visit and Lulu's comment, we dug out our inherited collection of Chance handkerchief vases, cleaned them up and here they are, altogether on top of the chest in the front room. 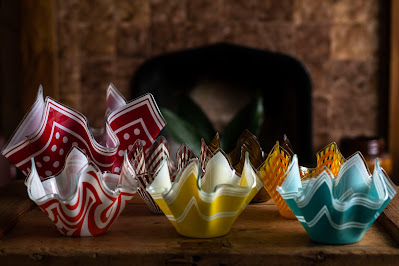 I've scattered them around now, finding complimentary settings for each, including this one, which works very well with the bookshelf Penguin Classics Sherlock Holmes series as a backdrop. 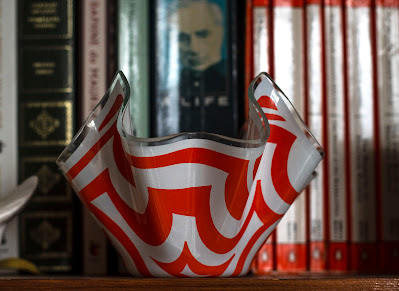 With a seemingly endless succession of storms and low pressure headlines and with work (and a stomach bug for me) taking over this week, we've not travelled far.

I received a reminder from the producers of Grayson Perry's Art Club of the themes and deadlines for the forthcoming series, having entered last year.  Cue much head scratching and a decision to enter something for the category 'Inside My Head.'  That should scare the living daylights out of them!  Here's a sneaky peak of the work in progress.  I have an idea "inside my head" to transform it into something moving and tangible, but am currently struggling with how best to execute it.  I have a few weeks to figure it all out/completely change course. 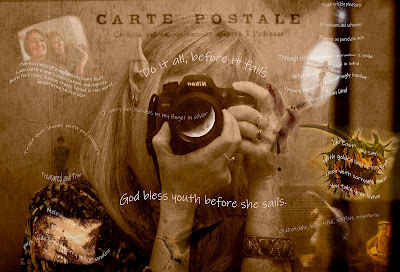 I've also indulged in one or two shopping sessions recently and this might be a good week to share a few of my finds.

First up this Dents Baker Boy hat, which usually costs around £30.00.  I paid less than five. 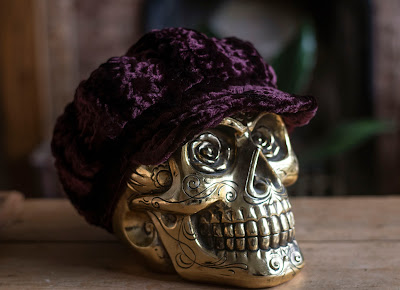 This silky (Polyester) pale pink top by a brand I hadn't heard of (Danish brand Mos Mosh) caught my eye and cost me £4.50, which is a steal when you check out the prices on their website. 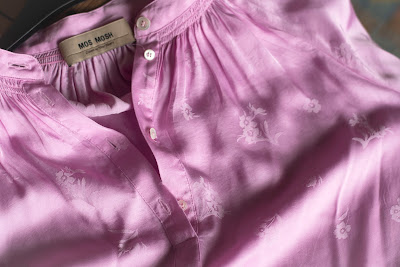 Another lovely cotton top; this time from Parisienne brand Suncoo (£3.50). 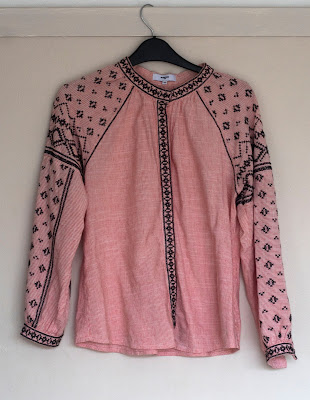 A handmade Turkish mug, made in the traditional Ottoman style - £2.99. 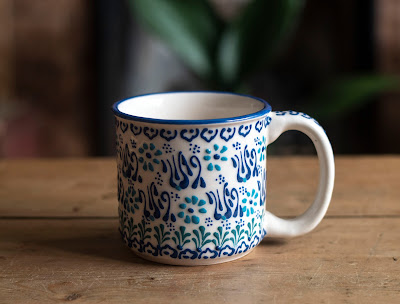 Gareth picked up this cheerful vase from a local charity shop.  We love a splash of red and this little West German piece is just perfect atop the fireplace in "nature corner." 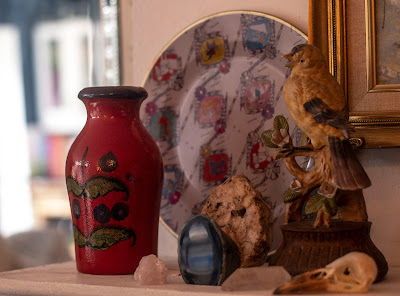 We have also added to our meagre vinyl collection.  I love Billie Holiday and after Lulu told me how amazing she sounds on vinyl (she's not wrong), we bagged a couple of albums, together with Led Zeppelin II and an old Stones album. 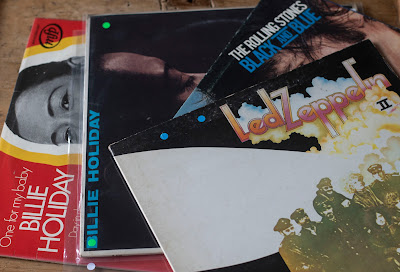 So, all second hand finds, the most thrilling kind.

Mercifully, we appear to have dodged the worst of Storm Eunice and the sun has finally broken through, although I'm not sure she's here to stay.  How have you fared?