I don't need to point out the obvious - the weather over the last few days has been more than favourable shall we say?!  But this heat isn't just confined to the climate.  Our garden has become a veritable hotbed of seediness (get it?) in the past 7 days; wood pigeons, magpies, they're all at it!  Constantly.  Publicly.  Perhaps our most bizarre observation is the squirrels that have transformed our crumbly old tree house-come-woodpile into a love shack.  So to Gareth's relief, the re-organisation of this area will have to wait until the wildlife peepshow is over.  Unfortunately, it's quite disconcerting when you are trying to entertain in the garden to the bird-like squawking of a squirrel's mating call.  They even chase each other around the area in circles, all heady, in lust and oblivious to all around them.  If I only had a couple of Terry and June sun loungers and a Benny Hill soundtrack, we could truly be back in the 70s.

The garden gives and it takes away.

It's giving us great fern coverage this year, although I really should thank the woodland for these. 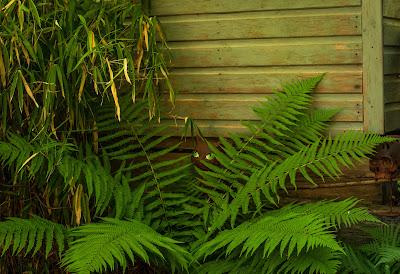 The Lavatera started small but is now charting a path to world domination. 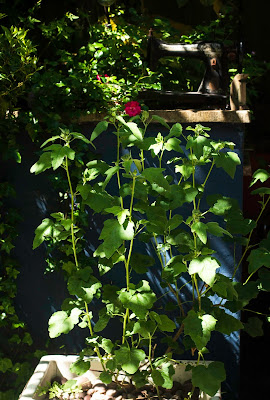 The foxgloves, although not expected to flower this year, are in bloom and brightening up a dark corner of the garden.  They are just visible behind the church relic we received as a wedding gift.  No idea what it is (I haven't spent much time inside churches during the course of my lifetime), but it's in the photo to remind me not to keep banging my head on it. 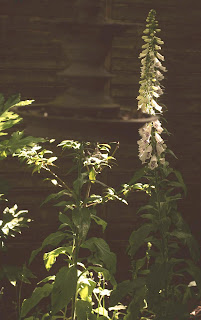 In the same area, the wild geraniums have taken over where the spring bulbs left off.  We're happy for them to do so. 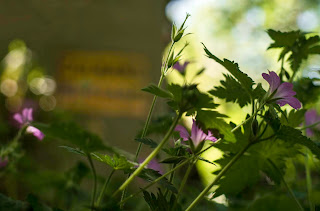 Since my last post, we now have two frogs in the pond and damselflies are regular visitors. 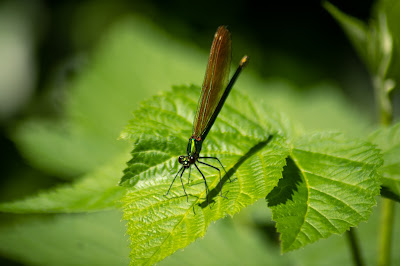 The honeysuckle is also growing well, but it's making my makeshift bamboo arch less of an arch and way more lopsided. 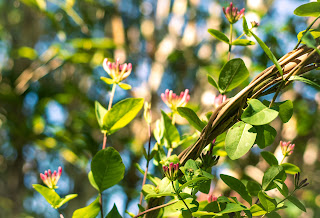 I also purchased some succulents from B&Q, as suggested by Vicky (Vintage Vixen: The Distancing Diaries - 13th & 14th June, 2021 (vintagevixon.blogspot.com).  They were originally intended to edge part of our driveway, but have ended up in a Belfast sink as the slugs have chewed the Cosmos back to ground level.  I think Lavender might be the way forward to edge the gravel drive, as it's poor soil and an area we tend to overlook and the Lavender won't mind too much. 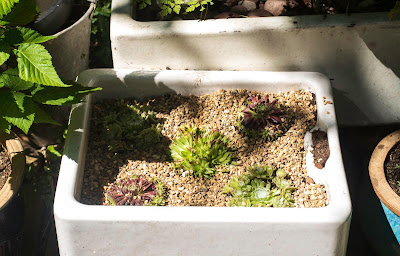 I re-potted the Black Rose Aeonium I purchased after seeing one growing like a Triffid at Arlington Court a couple of years ago.  For the record, the spaceman had been orbiting Earth for some time before touch down. 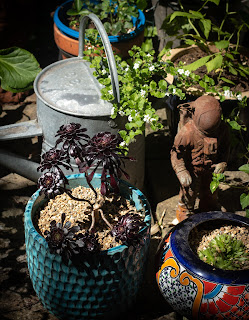 Aside from the Cosmos, one thing I wish the garden would take is some of the bamboo.  It's certainly going to take up precious time as it's so invasive.  It's also currently covered in a mysterious sticky residue and needs tackling.  That's a job for another week.  Just the thought of it makes my temples throb.
In other news, I have perfected French plaits starting at the top of my head and no longer have to make like a Hindu God to do them. 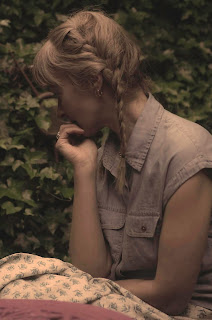 I took some more macro shots in the garden.  I don't always take pretty pictures.
The first was a happy accident - a Damselfly making its escape. 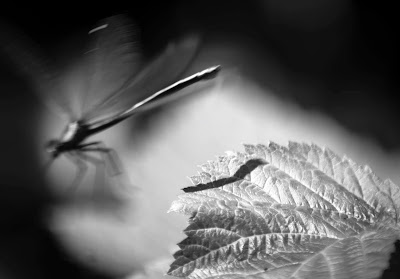 This abandoned spider's web, suspended between the metal chains of our windchimes also caught my eye - strength comes in many forms. 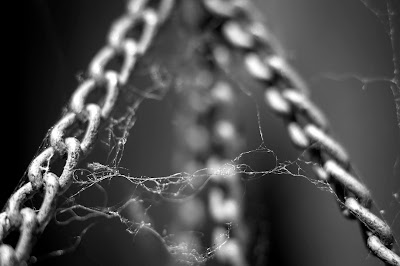 I've also completed a Treatment for my screenplay.  Hurray!  But I've missed the deadline for submissions to the BBC Writers' Room, which was apparently in January.  Boo!  I'm having a meeting with the story's mystery benefactor next week and will then start plugging away at it as and when I can.  Nigel, my chiropractor (and now business advisor) suggested I investigate funding options and offered to appear as a "tall, ginger farmer" should something ever come of this, which is very generous of him.  Quite why he wants to be cast as a farmer I didn't ask.
We also have our first show since before the pandemic at the weekend (MINI & VW BUS MEET - British Mini Club) - more of a low key, PR affair for us really and one we're happy to sponsor, as it's in our home town.  But my, how times have changed!  It took a 3 hour meeting with Public Health England to give this show the go ahead.  It's an outdoor show, but as expected, we have to take a lateral flow test (we're both also double jabbed), have hand sanitiser on our stand and even day visitors must pre-book their tickets.  Still, it will give me the perfect opportunity to hopefully get some great shots of some classic VW campers and Minis and to engage with strangers once more - at a safe distance.  Last time I was distracted by a balloon seller, so I'm making no promises. 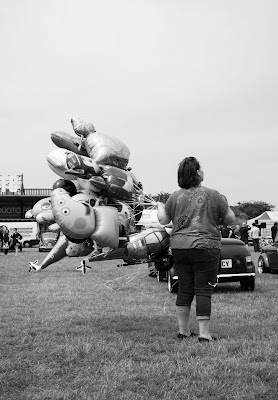 The weather is also sure to break at the weekend, as whenever we roll out the gazebo, a mini tornado whips up from nowhere.  That said, I could do with catching up on some sleep.  The heat, various TV shows and music have all conspired to keep me awake this week.  Anyone who is watching Time or happened to catch the last episode of Inside No. 9 will know what I'm talking about.
Randomly, this song has been something of an earworm for me too this week.  I've always loved Stevie Nicks (particularly 1970s/early 80s Fleetwood Mac Stevie) and once won a competition to go to a Q&A session with her at the Curzon Hotel in London, but logistics made it impossible for me to attend.  This is by no means one of her best, was never properly recorded in a studio and never featured on an album, but it's the staple opening track at many of her shows as her hardcore fans go wild for it.  It's a little too country for me, but for some reason was playing on a loop in my head a few nights ago and as a result I was still awake to hear the dawn chorus - the only thing that ultimately managed to dislodge it.  Anyway, I don't see why I should be the only one to suffer the curse.  I dare not watch it again, but if you get nothing else from this, check out those platform boots!  Sleep well.
Gold and Braid ~ STEVIE NICKS White Wing Dove - 1981 - YouTube
Do leave me a comment.  I love reading them and it helps me discover more about you too.  I'm still a relative novice to blogging and hopeless at discovering new blogs unless someone reads, comments and gives me the blogging equivalent of a slap in the face with a wet fish.
Until next time!
at June 16, 2021