Ordinarily we would be away somewhere, at least for some of the time, during Whit week.  But we're getting used to normal life being upended, spun in the air and landing somewhere quite different.

With UK accommodation now fully booked, we have been doing more of the same; working, gardening and in my case, exploring familiar territory, but challenging myself to discover something new through my lens.

Sunday was spent with friends at Dudmaston.  Sadly, there was way too much talking going on and not enough absorption of history and culture.  The weather was hot and for once, our picnic wasn't a couple of dog eared sandwiches slung into a ruck sack.  I dug out one of the two picnic baskets we received as wedding gifts and filled the bugger with all sorts of delights, including little cans of G&T.  Okay,  plastic champagne flutes don't really cut it when we really should have used gin goblets, but I think it's a marked improvement on sips of tepid water from a bottle.  Bob and Caroline brought the homemade scones, clotted cream and jam, so a pleasant afternoon was had by all - with little in the way of debate over whether jam or cream should go on first.  Incidentally, has anyone else tried Thunder and Lightning?  Traditionally clotted cream topped with golden syrup on bread, but these days applied to scones?  If you haven't, you really must.  It's delicious. 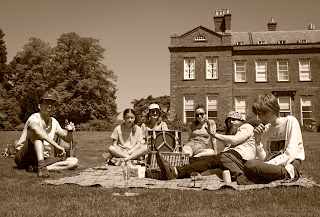 Another family day out took us to the National Trust's Warwickshire moated manor house, Baddesley Clinton.  Dating back to the 13th century and with its own medieval murder mystery, it's one of our favourites. 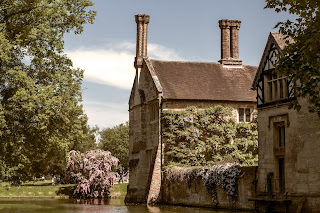 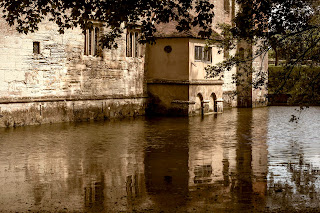 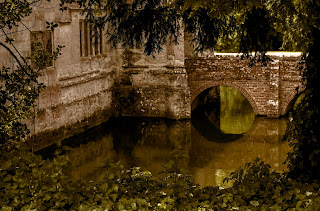 That said, I was so disappointed that the second hand book shop was closed due to continuing Covid restrictions.  It's one of the best!

The Canadian geese were pretty apathetic though, continuing about their business, navigating a sea of people enjoying picnics in the grounds to reach their grassy rich pickings. 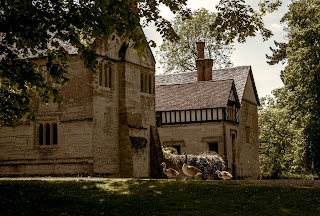 As I said, there's always something new to discover and I was surprised to find that we had previously missed the footpath to the Grade II listed St Michael's Church.  I have always been fascinated with churchyards and had I been alone, I could have easily spent an hour wandering amongst the gravestones, seeking out the oldest inscriptions and photographing their strange angles and lichen covered texture. 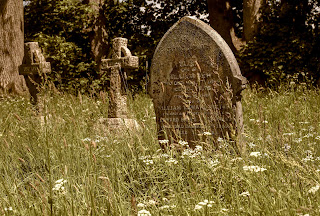 Inside, I was more interested in recording evidence of visiting a public space during a pandemic (clearly not the first this building will have witnessed).  Here, the handrails were clad in paper and plastic. 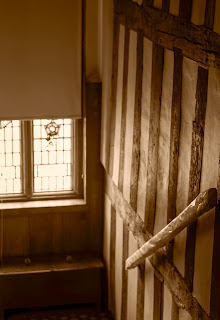 An obligatory shot of a masked visitor.  Moving from room to room was at times painstaking, but made for a more immersive experience as only one household at a time could linger in each room. 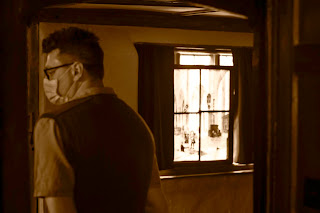 I confess, I quickly became distracted by the other more aesthetically pleasing features.  The sheer drapes, leaded windows and shadows they cast were just stunning. 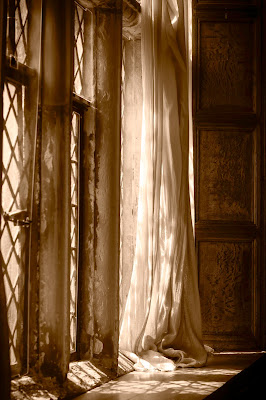 How many stories have been told by candlelight from the comfort of this chair? 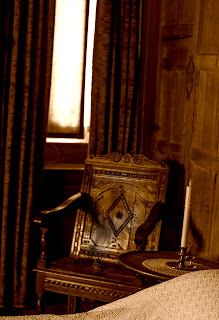 And of course, every old house must have armour.  I think it's the law. 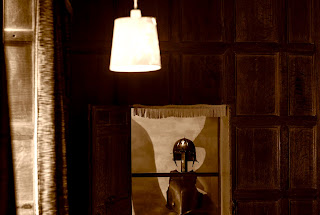 The remainder of the week's excursions were principally local; a snatched hour here and there between work, domestic drudgery and gardening.  I received news that my shortlisted photo submission to The Hive's forthcoming Reborn Exhibition had not been successful.  So, onwards...(I would say "and upwards", but it just doesn't work in this context).

One walk took us along the Wordsley to Stourbridge stretch of the Black Country canal network.  We've been so lucky with the weather this week and I love the interplay between light and shade.  Here's an aqueduct over the River Stour, bathed in beautiful sunlight. 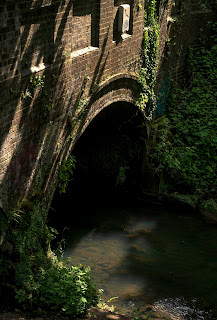 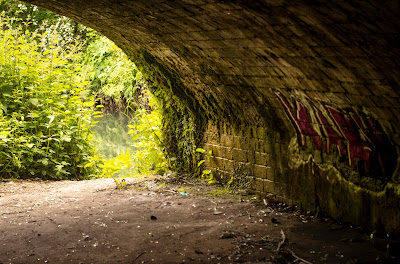 Meanwhile, back on the towpath.... 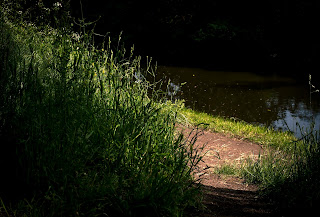 The network was teaming with life; animal, mineral, vegetable....teenage. 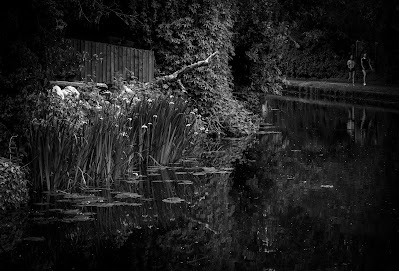 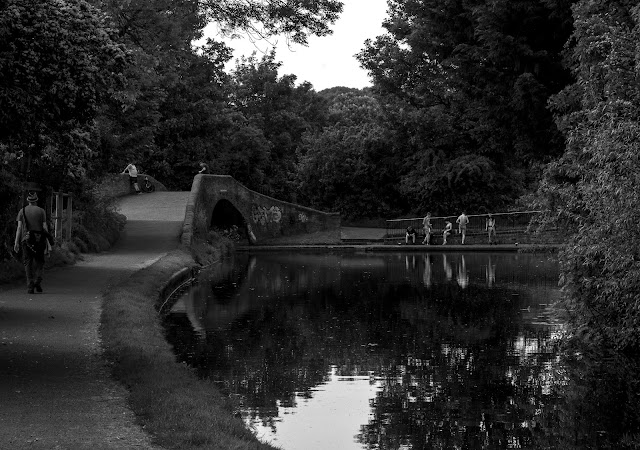 It's a fact that Elihu Burritt, the American Consul to Birmingham visited the Black Country in 1868 and said “the Black Country, black by day and red by night, cannot be matched for vast and varied production by any other space of equal radius on the surface of the globe”.  We may have lost much of our industry over the years, but Thursday night's sunset delivered something comparable to how the furnaces would once have illuminated the region's night skies. 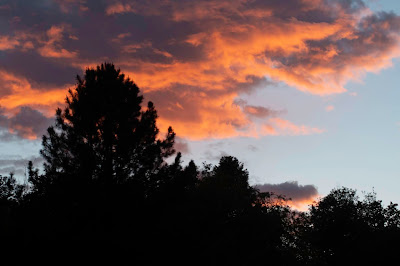 I'm slightly obsessed with cloud formations.  Yesterday's walk took us through a farmer's field, passing under a particularly weighty display. 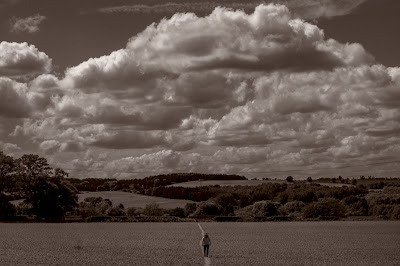 So to this weekend's news.
1.  I finally had a successful charity shop expedition, scoring a vintage 100% silk fitted blouse from Hong Kong, a Boden Breton top, a black Broidery Anglaise top, a vintage Jaeger black floral blouse and a 1980s (?) printed and lightly padded anorak, complete with shoulder pads.  The label is Compris by M Team, it's really not my style - other than I quite like the colour turquoise - but it spoke to me, so I bought it. 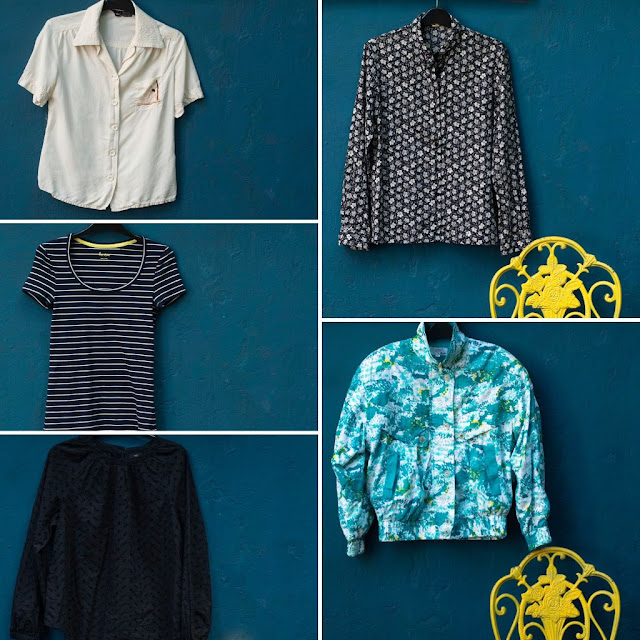 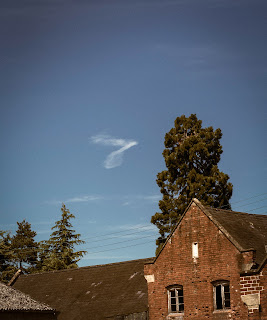 3.  When the sun shines, June is officially my favourite month.  Here's a short video I took on our daily walk, around 10 minutes from our house.  Just listen to those birds.

4.  Finally, yards from the spot featured in the video, was this cool Fiat 126 with Na Zadrowie emblazened across its rear window, which I believe roughly translates as "Cheers!" 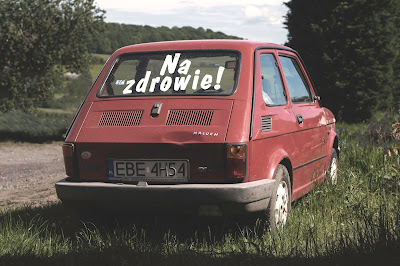 I will later get around to catching up on Instagram and blog posts, but for now, enjoy the rest of your weekend!