This week has been eventful for a mixture of reasons; some good, some bad.

Let's get the bad stuff out of the way first.  My car was written off  (not my fault).  A neighbour reversing off her drive inadvertently put her foot on the accelerator instead of the clutch!

In other news, our Gunnera Manicata is no more.  After many years of spectacular service (ignoring the environment-bothering tonnes of water), it's been  a bit lacklustre for the last couple of seasons and now, sadly, there are no signs of life - as evidenced by this photograph taken by Gareth.  Forgive the poor photograph and dreadful composition.  It was not my doing!

Positives?  I've acquired some batteries for our 1980s-never-been-used-by-us Pentax ME Super and am going to try shooting on manual with an analogue camera next week.  Why not?  I'm interested to see the results.  Film photography has a unique quality, very different from digital.  If I achieve any usable images from a couple of rolls of film, I will be relieved and very happy.  I'll feel I've earned my stripes!  (Actually, stripes would be most unwelcome.  A little grain is fine). 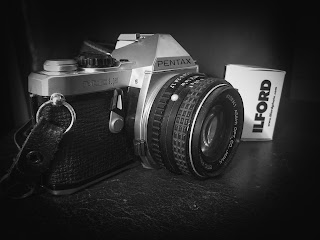 I've also been working at the Black Country Museum for a few days this week, which is always immensely interesting.  It's an open air museum and is recognised the world over by Peaky Blinders fans, although it is so much more than that.  It's a special place (not to mention a TikTok sensation), bringing to life the history of one of the first industrialised landscapes with a talented workforce and a team of dedicated volunteers.  If you're in these parts, you really should visit.  Fingers crossed for a May 17th re-opening!

My work pattern has afforded me little time for photography this week, so I've been trying to think what to include in this blog post.  But a chance conversation sparked a train of thought.  So think of this blog as effectively a photographic stream of consciousness.

One of my colleagues happened to mention that she is from Romany Gypsy stock.  Her grandparents' caravan was set alight when they passed.  She herself was raised on a narrowboat and enjoyed a childhood fully immersed in nature.  She recalled watching a swan teaching a cygnet to fly, which I found magical.

So here in the Black Country, we have canals, swans and narrowboats aplenty. 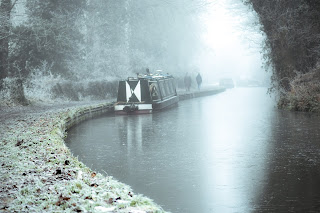 I've found that I've gained a new found interest in narrowboats.  Correction.  I've always appreciated their value; practically and aesthetically (I love their unique characters, names and designs and the associated Roses and Castles canal artwork). 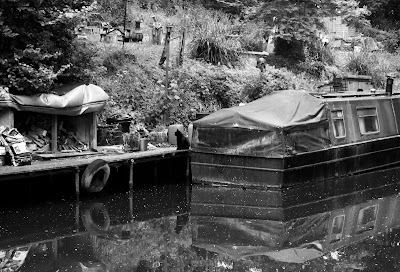 They are commonplace in and around Birmingham and the Black Country, courtesy of our extensive network of canals, so it's easy to take them for granted.
The concept I have struggled with is the narrowboat holiday.  I like to set my own pace on holiday and I'm not sure how I would adapt to a constant leisurely pace being imposed upon me; the idea that walkers could overtake the only mode of transport available to me.  That said, I'm making progress in that I am now at least open to trying.  I thank lockdown for my change in attitude.  Any new experience within reason) is now fair game.  Plus, Slow Travel is now a thing.  Google it.
Incidentally, I caught this man navigating his boat through a lock at the weekend.  Hours later, his wife spotted his photo on my Instagram feed and left a lovely comment.  Small world!
We also have visiting travellers periodically here in the Black Country, albeit less frequently these days (traditional horse pulled Vardo caravans with their stunningly intricate decorations).  Romany Gypsies have always fascinated me - from the generic image we have of female fortune tellers, to the quasi mystical "slow travel" travelling lifestyle and the fact that their lives and wagon artwork are so heavily influenced by nature.

I lived for the best part of a decade in the village of Great Missenden, also home to Roald Dahl.  I was lucky enough to see first hand, his famous writing hut and his beloved Gypsy caravan in the garden of Gypsy House.  I've wanted a gypsy caravan ever since.

There is the famous "Black Patch" in Smethwick, on the outskirts of Birmingham (a thriving Romany Gypsy community back in the 1880s).  It is noted that after the death of Charlie Chaplin's widow, Oona, their daughter inherited a bureau with one drawer remaining stubbornly locked.  When it was prised open, a handwritten note from one Jack Hill, penned in the 1970s to Charlie was discovered, telling him that he had "entered the world in a caravan that belonged to the Gypsy Queen, who was my auntie.  You were born on the Black Patch in Smethwick."

So there you go...a little insight into the Black Country.  Black by name and black by nature - from industry furnaces, smoke and smog to the cut, Gypsy encampments and dark secrets.

Added to my "To Do" list now is painting a discarded horse shoe discovered on one of our lockdown walks.  There's plenty of artistic inspiration in these parts!  Given the forecast, I've also decided that it's not too late to attempt to crochet a bobble hat.  I've neglected my hooks in recent months, but the news this week that crochet may be an activity that prevents the onset of dementia appeals to a a hypochondriac like me.

What have you got planned for this icy Easter?