Well we're knee deep in April now and still there's an unseasonably cold bite to the wind and strange polystyrene-like snow showers in between the spells of spring sunshine.  All of our planting plans are on hold, as we don't have a greenhouse (nowhere to put one, not keen on plastic).  Consequently, our kitchen is slowly but surely morphing into a makeshift hothouse.  There are Cosmos flowers on the kitchen counter, a dwarf Rhododendron in full bloom on the kitchen floor, alongside a Gunnera Manicata, embedded in compost and a buried Elephant's Ear rhizome, which is stubbornly refusing to make an appearance.  Oh, and not forgetting the pond plants standing proud in shallow baths of water and the large and ailing spider plant being nursed back to life.

I also have lupin seeds and plans for sweet peas, but like some kind of horticultural conveyor belt, I need to move some pots outside before I can start cultivating anything else.  Can we please stop with the frosts now?

That said, the threat of the mercury dipping below zero does afford me an excuse to buy knitwear. 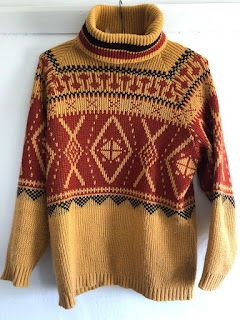 This gorgeous 1960s jumper arrived over the weekend.  Labelled "Ivanhoe" (Swedish??), it looks as though it's been in storage for the last five decades.  It's immaculate!  I'm hoping I can manage to wear it more than a handful of times before it's pilled, clawed by the cat or its pattern takes on a more abstract form courtesy of some stubborn stain.

Over the weekend, our daily walks took us along the local canals.  Firstly, a stretch between Wordsley and Stourbridge (once the centre of England's glass industry), passing these old factory units, the perfect subjects for urban exploration photography.  I think they look like a film set. 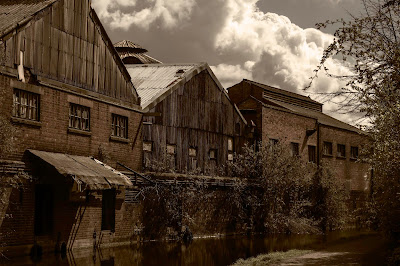 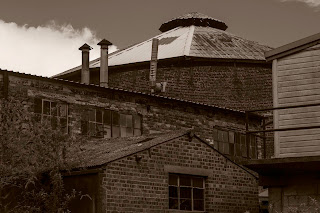 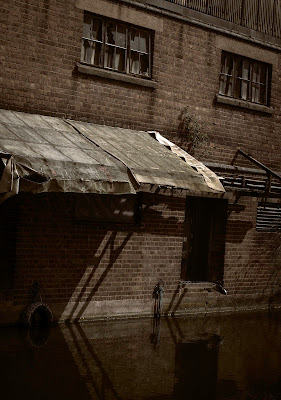 There's never a dull moment along the canal.  An elderly lady pushing her Scottish Terrier along the towpath in a pushchair, suddenly abandoned the pushchair, crossed back over the bridge and started calling for "Billy."  I took the opportunity to capture the confused looking canine, only to realise, minutes later, that Billy was not, as I suspected, another four legged companion, but in fact the lady's grandson! Something a little back to front about the whole scenario. 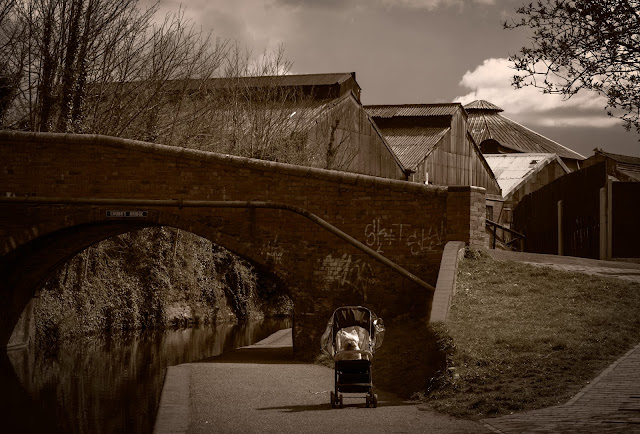 A little further along, we spotted a white cat.  A sign of good luck?  Potentially not for these ducks.  The murderous intentions of this cat were in evidence in its furry feline features and intense gaze.  The ducks did well not to make eye contact.  If they had, I'm sure their fate would have been sealed.  Thankfully, they had the advantage of water and lived to quack another day. 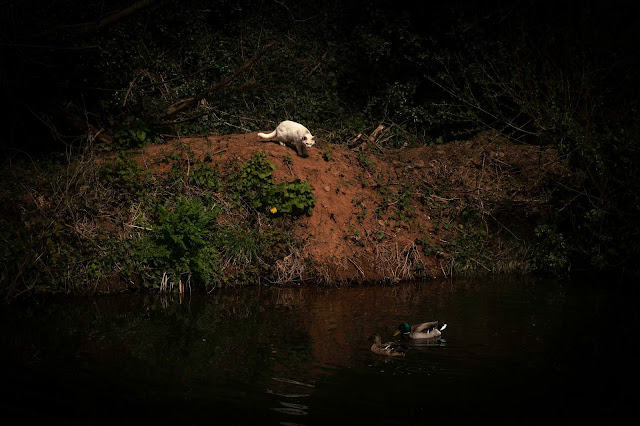 Sunday took us along another, more tranquil stretch of canal, in the nearby ancient parish of Kinver.  Tranquillity was what was needed after five days of an off and on headache.  Only just shy of two weeks since having had my first Covid jab, my hypochondria was kicking in and I was convinced I had a blood clot, despite all of the information suggesting that the headaches would be constant, severe and accompanied by other symptoms.  More likely, was that I was in the grips of a nagging tension headache.  It's now cleared.

More cats!  There were no less than 3 felines afloat on this narrowboat.  Only two are visible in this image. 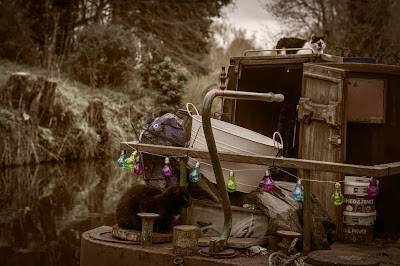 Here's the third.  I almost missed him as we passed by, hence my shoddy focusing. 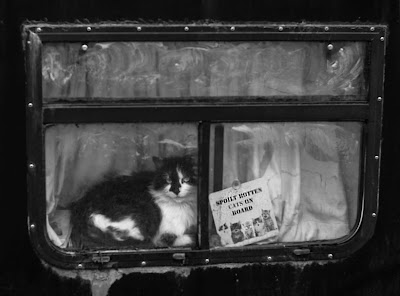 We also enjoyed a visit from our friends at Brutebox.  They make amazing sound systems out of old ammo boxes, fuel cans and other unlikely casing structures, powered by a battery with enough oomph to run a camping shower.  The twin temptations of music and keeping clean make them a hit with festival fans.  Gareth designed a range of promotional stickers for them and so I was tasked with photographing them for the website. 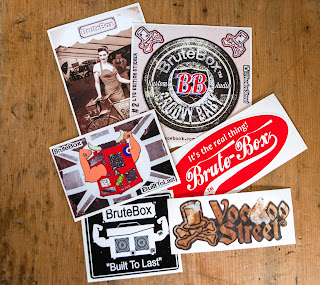 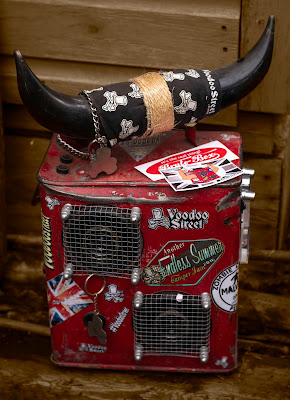 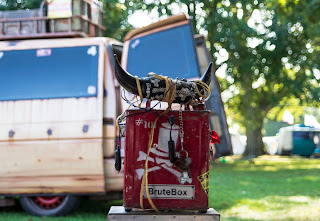 This is our Brutebox, styled/embellished/distressed by us with a handle of horns, Voodoo Street stickers, our spray painted, stencilled Voodoo Street logo and air rifle bullet indentation.
You can read more about them here.  BruteBox - Unique ex-military ammo box music players
Yesterday marked the further relaxation of Covid restrictions, so we took a trip to the twin towns (High Town and Low Town) of Bridgnorth in Shropshire, linked by a Victorian funicular railway and nestled on the banks of the River Severn. 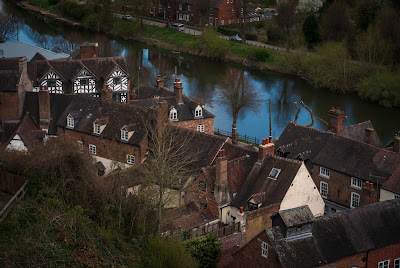 High town was bustling, with many people now electing to wear masks in the street.  The town's cafe culture appeared to be back in full swing. 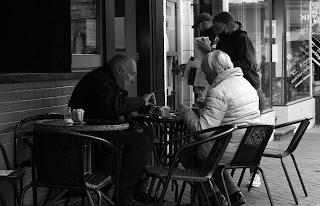 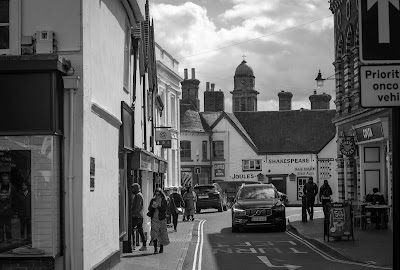 Small groups of youngsters sat on the castle walls (offering the best views of the valley below).  One shouted that she liked my jumper.  Everyone seemed high on life. 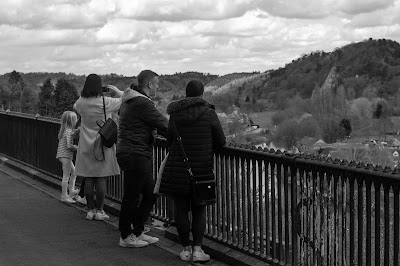 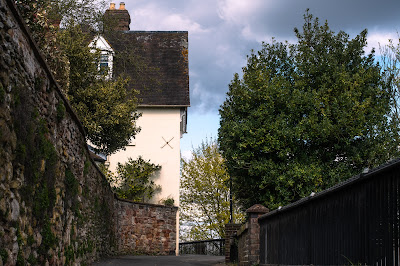 This beautiful Bengal cat lives in a house bordering Castle Walk, but here he is, doing what cats do and heading into another property several doors down. 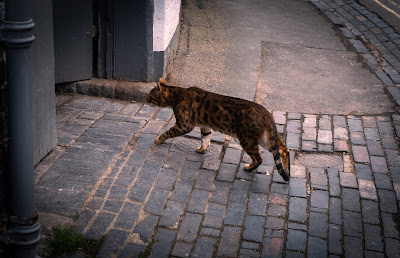 Society is gradually opening up for everyone now, not just cats.  This retro road sign, which I must have walked past hundreds of times, made me smile (OK I have a dark sense of humour), its message having added pertinence in the Covid climate. 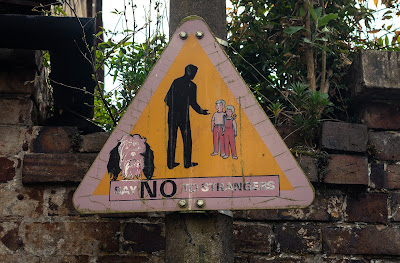 So to summarise my first day of freedom, we drove to a destination 14 miles away, visited one shop (Superdrug), spoke to 2 people outside of our immediate family (the shop assistant and jumper girl), but stopped short of dithering in a beer garden....and yet...it was such a good feeling.

What did you get up to?