All Things Bright and Beautiful

Last week was, in the main, about drudgery and dentistry.  No one wants to hear about my ongoing battle with Royal Mail, or my dreaded dental repair and whilst we did squeeze in a visit to Ludlow last weekend, I'm still on a bit of an urban trip at the moment.  So, this weekend, we headed 16 miles down the road to Digbeth, the industrial heartland of our second city.

The last time I visited the area was with Vix and it had been transformed into the dangerously dark world of Peaky Blinders, Birmingham's now world famous sons.  On a normal day however, this pretty gritty part of the city is a developing, bohemian district known for its street art, hipsters, creative workshops and grungy clubs.

Greeting us on our walk to Digbeth was a reminder of Birmingham's rock heritage.  Here's Ozzy and his Black Sabbath band mates keeping watch over their beloved city. 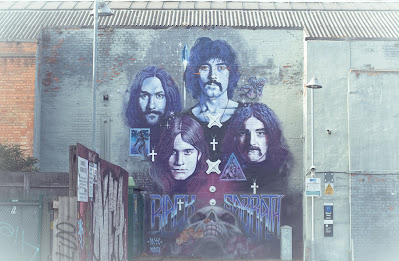 Coincidentally, Ozzy Osbourne and his family used to live just up the road from me in a very different part of Britain - leafy Buckinghamshire.  We only discovered this some years later, but for a number of years in the mid eighties, we were perhaps 2 miles apart.  It was good to know that I wasn't the only Midlander in the village.

Ozzy's son, Jack, went to the prestigious, private school in our village and on one occasion a number of students from that school came on a pre-arranged trip to watch my Dad (the village butcher), making sausages.  I'm not quite sure of the pre-text of this visit, but do recall Dad being spooked by the assembled group of small, immaculately dressed children with their clipped English accents and adult demeanours.  Maybe Jack was amongst them.  Years later, I heard Jack refer to Kandy's, the village sweet shop and I was instantly transported back to my childhood.

Onwards and into Floodgate Street we walked and were lucky enough to see the graffiti artists in action. 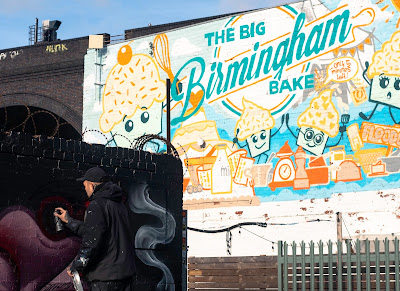 The weather was clear but cold and the wind was dead set on turning my barnet into a birds' nest, but it provided a beautiful blue sky backdrop to the ice cream colours of The Big Birmingham Bake mural.  I just love the juxtaposition of the urban artist in action and the Victorian engineering of yesteryear (railway bridge just visible).  The razor wire provided a hint of danger; a reminder that it's not always sunny in the city. 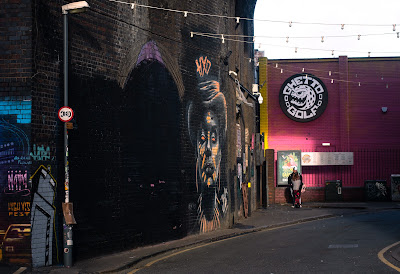 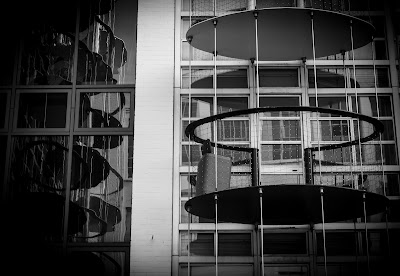 This imposing fellow had quite an intense stare I thought, but his hipster beard was a sure indication that he was a Digbeth regular. 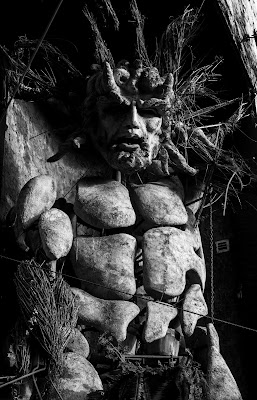 Talking of hipsters, this sign caught my eye and amused me greatly, outside the delectable Stickie Fingers dessert shop. 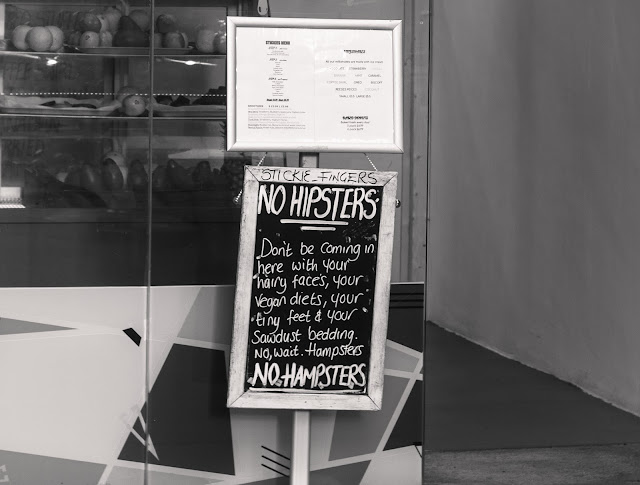 Here's Gareth doing his best to look like one (a hipster, not a hamster...that would be very wrong). 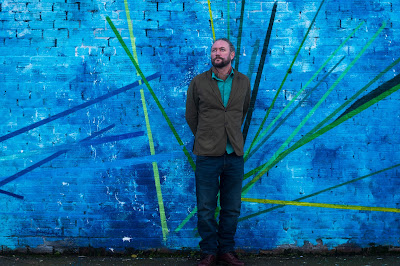 Here's some signage of a more esoteric nature. 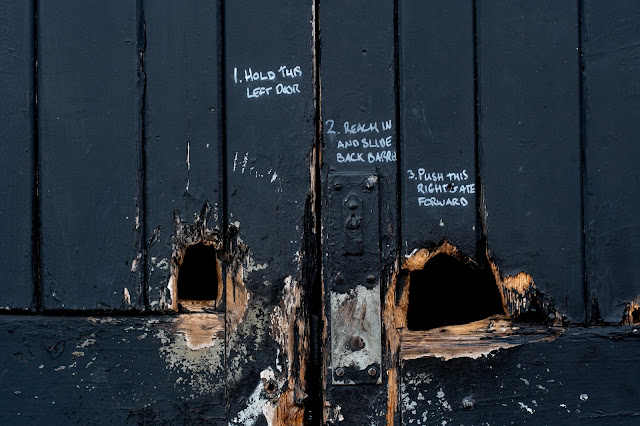 I loved the shreds of plastic blowing in the breeze, emulating ghostly locks of hair, possibly belonging to the Voodoo/Tribal woman on the wall. 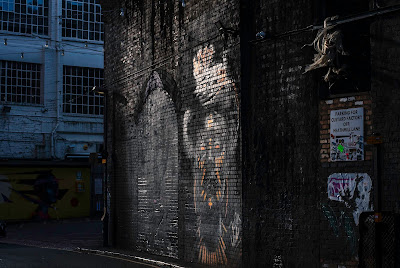 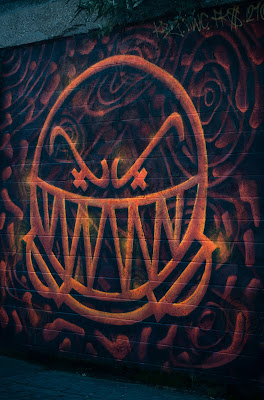 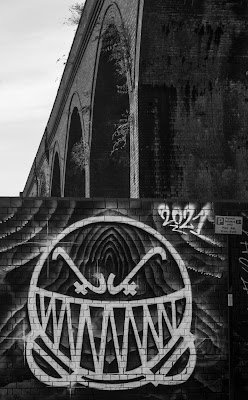 Gareth was quite chuffed with his souvenir of the day - a glass stein from the German Christmas market, discovered perched on the edge of a skip.  Last of the big spenders! 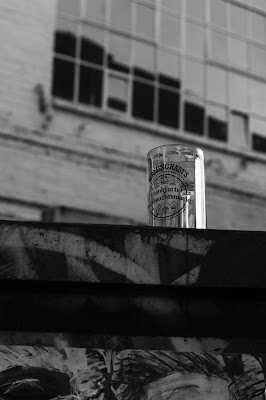 The car park of the Custard Factory (no longer producing yellow powder, but a creative and digital workspace and home to numerous independent businesses) has to be the most photogenic car park, screened off from the road as it is by a wall of crushed cars. 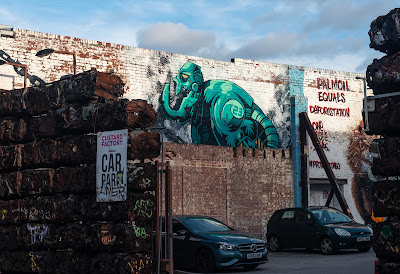 At every turn these streets tick the urban aesthetic box.  The beautiful industrial buildings and striking and ever changing urban artwork are magnetic to visitors. 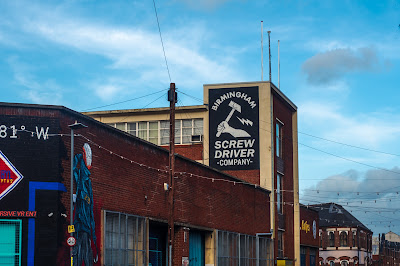 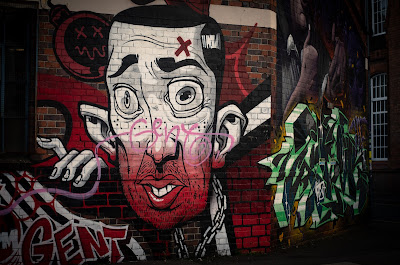 The gentrification of Digbeth is ever looming.  That much is true.  It's an unstoppable force, but if I could freeze time, I'd do it quite soon. 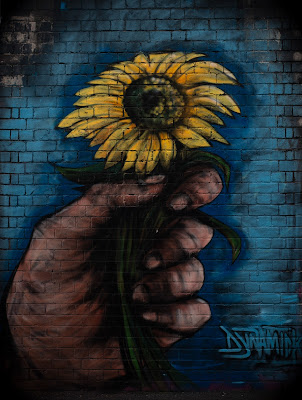 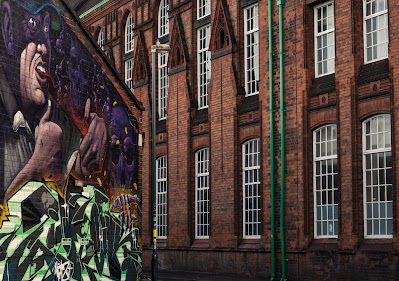 Some of the buildings need to be preserved and I suppose there is an inevitability about the chain of events that will ensue.  I just hope we still retain some authenticity - the odd grimy pub, a few dishevelled buildings, the odd undesirable character. 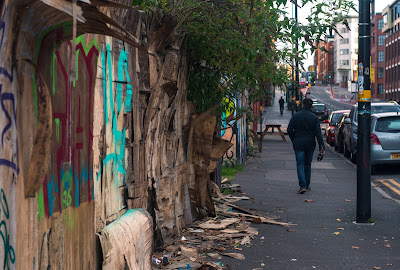 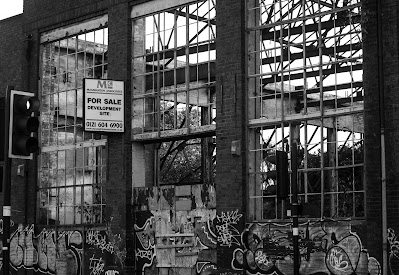 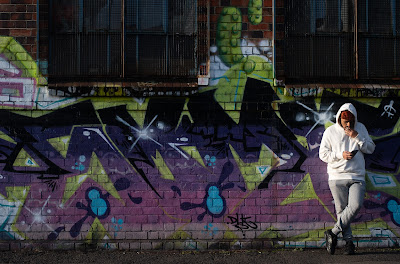 To me, there's something strangely reassuring about linking to the past in this way and feeling that all life is here...a sense of balance.

All things bright and beautiful must inevitably be followed by all creatures great and small (for the purposes of this blog) and I must share this unexpected highlight from the last 7 days.  I met up with my friend and some time photography work colleague, Jenny, this week.  We had coffee, talked business and put the world to rights.  The location?  Halfpenny Green Vineyards - a gorgeous 30 acre vineyard situated 250ft above sea level in well sheltered south facing slopes - created as a family business 30 years ago.

As we left, we had a wander through the neighbouring craft village.  Almost immediately the sound of birds filled the air and we were treated to the most incredible vista.  The sky was full of parrots - yes parrots - circling overhead, their colourful iridescent feathers catching the sunlight as they soared and swooped.  For once, I only had my mobile phone with me, so forgive the grainy images. 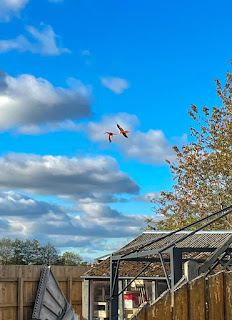 Just in case you are wondering if we'd taken part in one of the Vineyard's popular gin tasting sessions, there is a small Zoological Park on site and we must have coincided with one of the park's bird shows.  Before we could catch our breath, the parrots were joined by birds of prey, (although they sensibly retreated to the trees, where they remained, like giant holly berries) and storks!  Two men who also witnessed the spectacle, commented that it felt as though we had strayed into Jurassic Park. 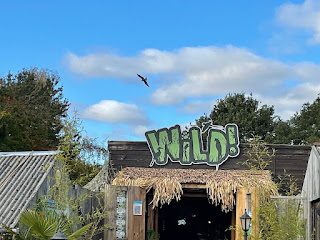 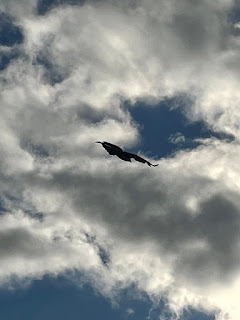 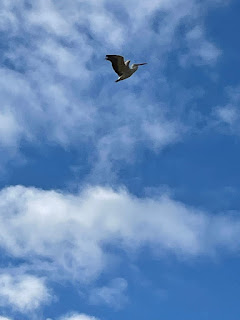 Whilst nosing at the enormous Amber rings in the window of the small jewellers, one of the men commented that the jeweller had "sorted out my 15th century ring."  Our ears pricked up immediately.  Turns out he's a metal detectorist and his discovery is now on display alongside the Staffordshire Hoard.  Apparently the fields in these parts are brimming over with unexpected treasures.

Finally - and again, apologies for the grainy mobile phone pic - but here's a beautiful fox my son captured on his quest to find the best vantage point to watch the fireworks. 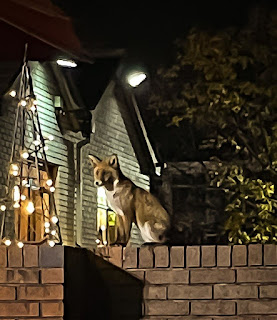 So there you have it, all things bright and beautiful, all creatures medium sized and small.

I'm off to buy myself a metal detector.  Please feel free to leave a comment or news from your part of the world.