My recent reference to our forthcoming island getaway was slightly tongue in cheek.  The phrase usually conjures images of cornflower blue skies and glittering mercury waves breaking onto sun drenched sandy beaches.  We had three nights booked on the island of Anglesey, just off the Welsh coast and the first time I made reference to it, we were dithering in the Autumn gloom and had resigned ourselves to a wet and windswept September break.  But guess what?  We got wall to wall sunshine and temperatures regularly peaking at 30 degrees.

Making the most of our time away, we took the scenic route to our destination, taking in Llangollen and Portmeirion along the way.  I should perhaps record the trip in chronological order.  However, when it comes to editing photos from a trip away, order rarely comes into the equation.  Instead, I tend to cherry pick my favourites and attempt to recreate the atmosphere and essence of places that had a profound effect upon me.

So this blog will be devoted to the time we spent on Ynys Llanddwyn, a staggeringly beautiful tidal island off the west coast of Anglesey and the original love island.  When we first visited on Wednesday morning, the island was inaccessible, so we decided to head back to our digs (a 15 minute car journey), enjoyed a leisurely lunch and returned a little later when the heat of the sun was a little less intense.

It's a 40 minute walk to the island at the far end of a glorious sandy beach flanked by pines forming part of the Newborough Warren National Nature Reserve.  The pine forest approach to the beach reminded us of our time in Lacanau, the famous seaside resort and surfing hotspot on the French Atlantic Coast, but what Newborough beach lacked in waves, it more than made up for in scenery. 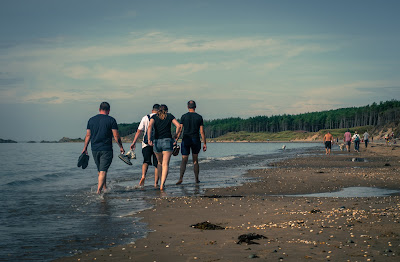 To our right, we had views of the pine forest and sand dunes and to the left, an incredible vista of Snowdonia and the Llyn Peninsula. 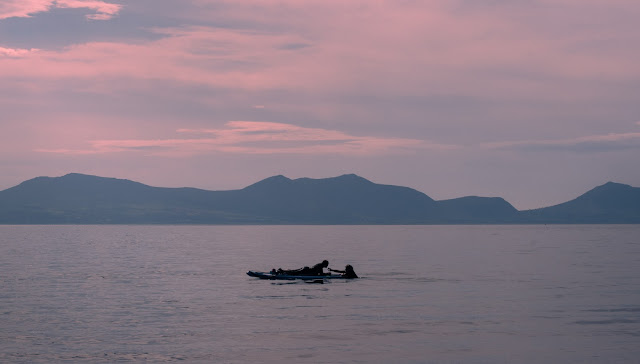 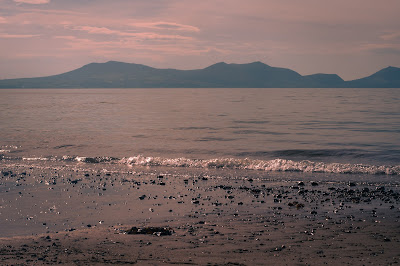 Ahead and curving around to the left, lay the mystery and promise of a once inhabited island retreat. This girl in her white beach outfit, reminded me of Sylvia Plath in her white bikini top and shorts and her famous quote: "I'm as solitary as grass." 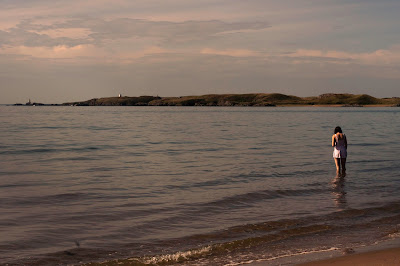 Whilst I like to have some idea of places to visit when travelling somewhere new, I also hate to be too informed.  It's a tricky balancing act because we don't always have time to waste, but information is so accessible to us nowadays, it's refreshing to experience the feeling of exploration and the sense of wonder at a new discovery, even if it is a well trodden path.  So rather than a verbatim recount of the tourist information, I will give you the facts that fascinated me and hopefully a little of the essence of the place. 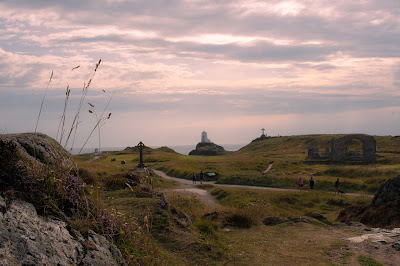 The island's name (Llanddwyn) originates from St Dwynwen, the Welsh Patron Saint of lovers.  She's the Welsh equivalent of St. Valentine and her feast day is 25th January.

Dwynwen (pronounced dooIN-wen) was alive during the 5th century AD and was apparently the prettiest of the 24 daughters of a Welsh King named Brychan Brycheiniog.  She was also said to be very kind and had no shortage of admirers.  She fell for a prince named Maelon Dafodrill, but rejected his advances.  History is inconclusive as to the reasons for this rejection.  It was either because she intended to devote herself to God and join a nunnery or (and this seems to me more likely) because her father had betrothed her to one Maelgwyn Gwynedd, who was a much needed ally for her father and not a man to be crossed.  Whilst it is said that Dwynwen's true love, Maelon was content to just be with her, she was forced to reject his advances and the relationship ended.

Either way, Dwynwen prayed to be delivered from her unhappy situation and for the strength to forget her forbidden love.  In her dreams, she was given a potion which had the unfortunate result of turning Maelon to ice.  Still within the dream, she then prayed that she be granted three wishes:-  1) Maelon be defrosted 2) all true lovers find happiness and 3) that she should never again have to marry.   She somehow escaped to Llanddwyn island and lived out her days there, (as a nun or hermit, depending on which version you read) in perfect solitude. 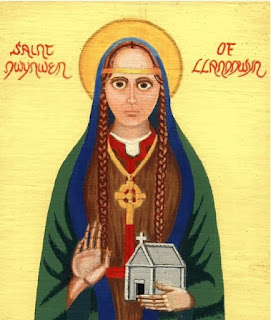 Judging by the startled look in her eyes, I'm wondering if the effects of that potion had completely worn off when this portrait was taken.

The island later became a place of Medieval pilgrimage.  Women could test the strength of their relationship by scattering breadcrumbs on the surface of the water in the old well, then laying her handkerchief on top. If the inhabiting eels disturbed it then her lover would be faithful.

Sadly, on arrival, we saw no evidence of the wild ponies I have since discover often graze on the island...just a farmer making hay. 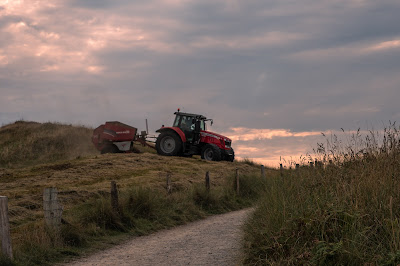 This celtic cross, commemorating Llanddwyn Church which at the time was largely ruined and overgrown is inscribed with these words:  "They lie around did living tread, this sacred ground now silent - dead." 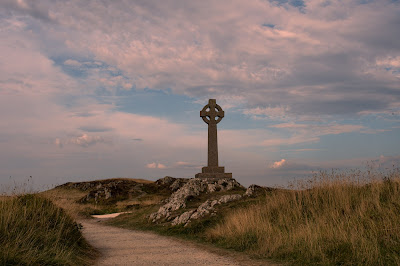 Our afternoon exploration of this island on an unseasonably warm September afternoon will stay with me forever.  This really is an enchanted island.  Even prior to my editing of the photos, I was struck by their soft light and magical, dreamy tones.

The second cross, visible through the ruined church arch, commemorates the death of Dwynwen. 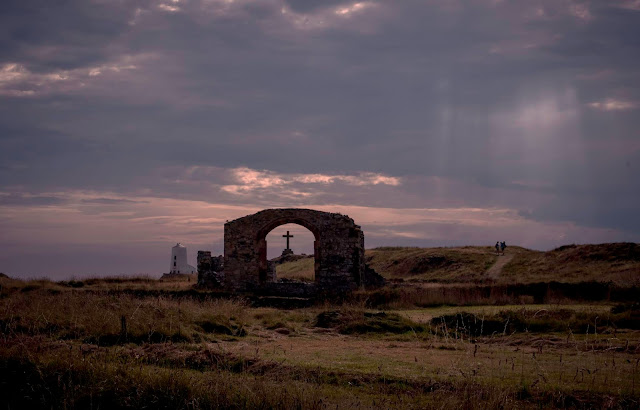 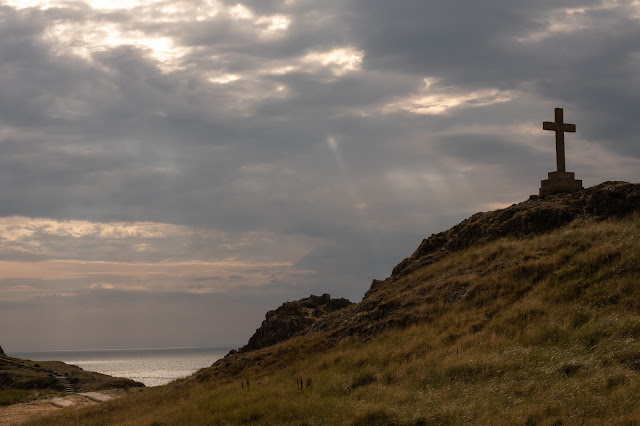 Four pilot houses built to house the pilots who guided ships through the treacherous Menai Straits and manned the island's lifeboat until 1903. 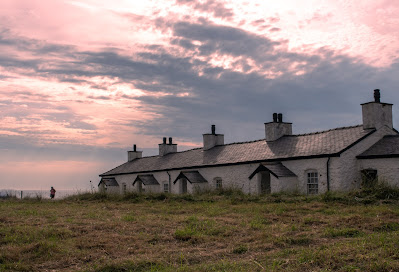 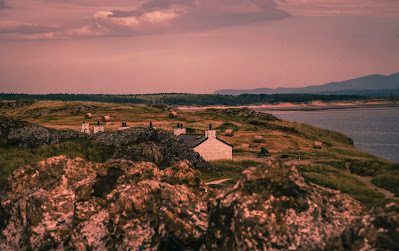 There are two towers on the island.  The larger one, pictured here, is the original lighthouse. 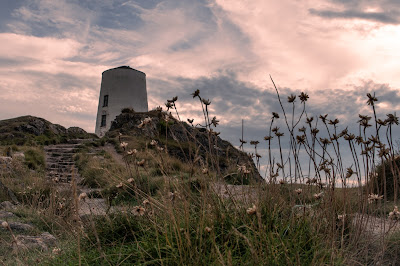 The smaller tower is a day-mark signalling the entrance to Pilot's Cove.  Texture overload! 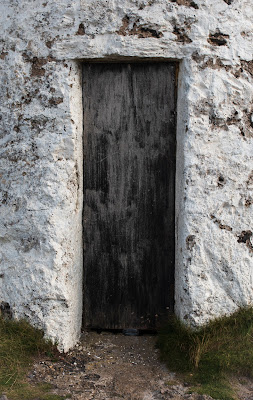 From these vantage points, there are several craggy islands inhabited by seabirds (notably cormorants) and basking seals.  One seal waved at me, but I didn't have my zoom lens and in any event, had recently read of the plight of UK baby seals, forced into the water before they are ready by over eager tourists and ultimately separated from their mothers and effectively orphaned, so was happy to keep at a safe distance. 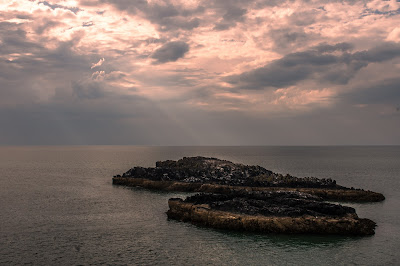 Instead, I focused my attention to the light play on the surface of the sea. 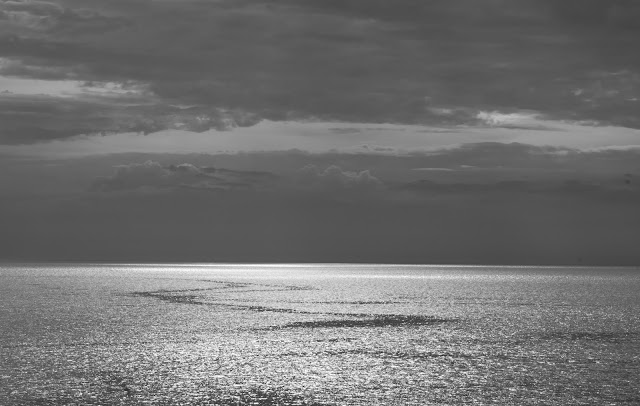 Here's the view looking back from the lighthouse to the commemorative cross. 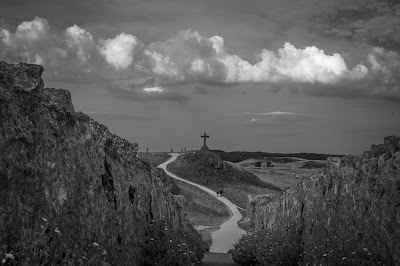 According to legend, Dwynwen's dying wish in 465 A.D. was to be carried up to watch the sunset through a cleft in the rock which still stands to the north west of the ruined church to this day.  It's not hard to understand why. 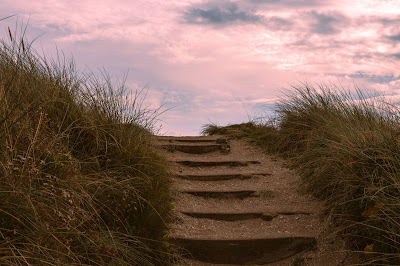 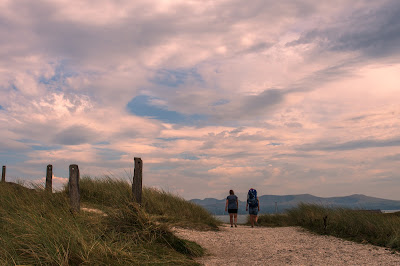 I'm not a religious person, but some places are good for the soul and totally uplifting...and as St Dwynwen once said: "Nothing wins hearts like cheerfulness."
at September 10, 2021 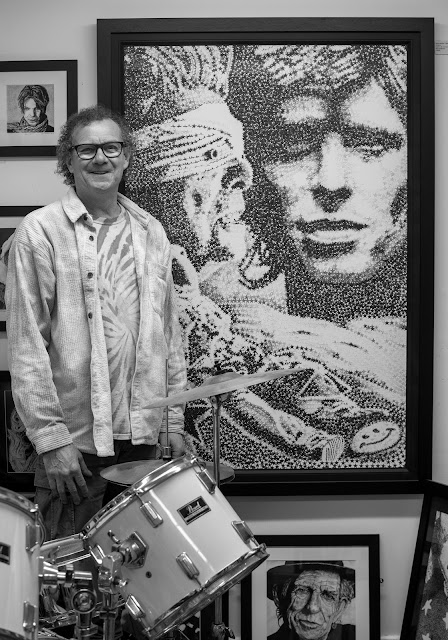